This will be heavily glassed and painted on both sides, not worried about fir checking

which is better for stiffness and strength as a floor core material?

Followup: based on the directions from my plan designer, I built my dory right-side up, but blocked the bow/stern up and forced the midships down with braces up to my roof trusses (similar detail as recommended by Capt. Culler) 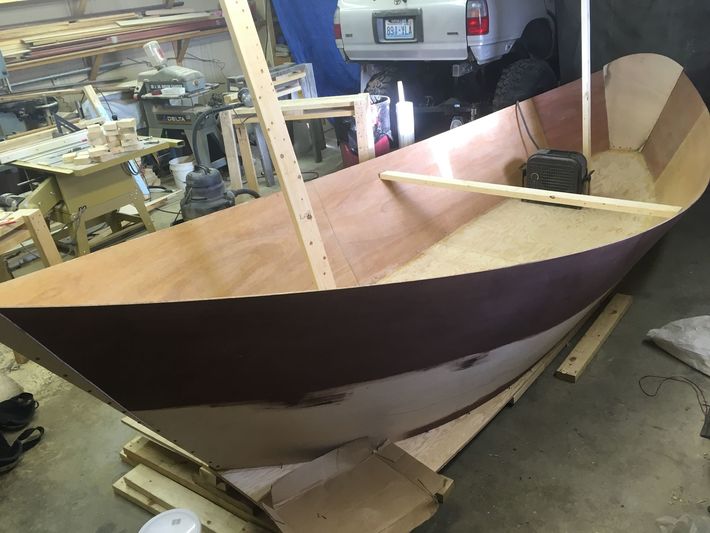 I made relief cuts at the bow to get the ply to conform.  In hindsight, I would have more fully cut the bottom to shape.  Leaving those triangles semi-attached added stiffness outside the floor perimeter, and it put a bit of concavity to my floor instead of being flat from chine to chine.

Permalink Reply by Shawn Baker on November 6, 2018 at 6:52pm
That's awesome David. I'll bet it also helps keep the curve of the rocker fair. It's so hard to bend the end of a board.

Yet another trick to bending the bottom is to attach it at the bow with the rear supported in the air with ropes or something. Then you have 16 or so feet of bottom to use as weight as you lower it down. Let's get this build started!!

Matched the panels as best I could.  Darker panel will end up at the stern. 2" only did half the depth of the scarf on the 1/2" floor ply, so I crosscut/kerfed it for stock removal and cleaned it up with a block plane. When the plane is sharp and set right, and you can cut spirals of crossgrain doug fir plywood...it's a great day. Glued up and weighted overnight.
W8x67 steel beams. 67lbs per lineal foot. The long one is over 200#. Makes the rail anvil seem puny! Tracing the pattern and bulkhead locations onto the side panels.
And I took on an apprentice.  Buddy of my daughter's.  He built a dory-style model sailboat from balsa and his own imagination.  Soon wants to build a sailboat.

With 2 jigsaws and 2 guys cutting, it didn't take long to cut the side panels. Nice Shawn! Can we get more pics of the transom clamp up? It makes it look a lot simpler than I would've originally thought. 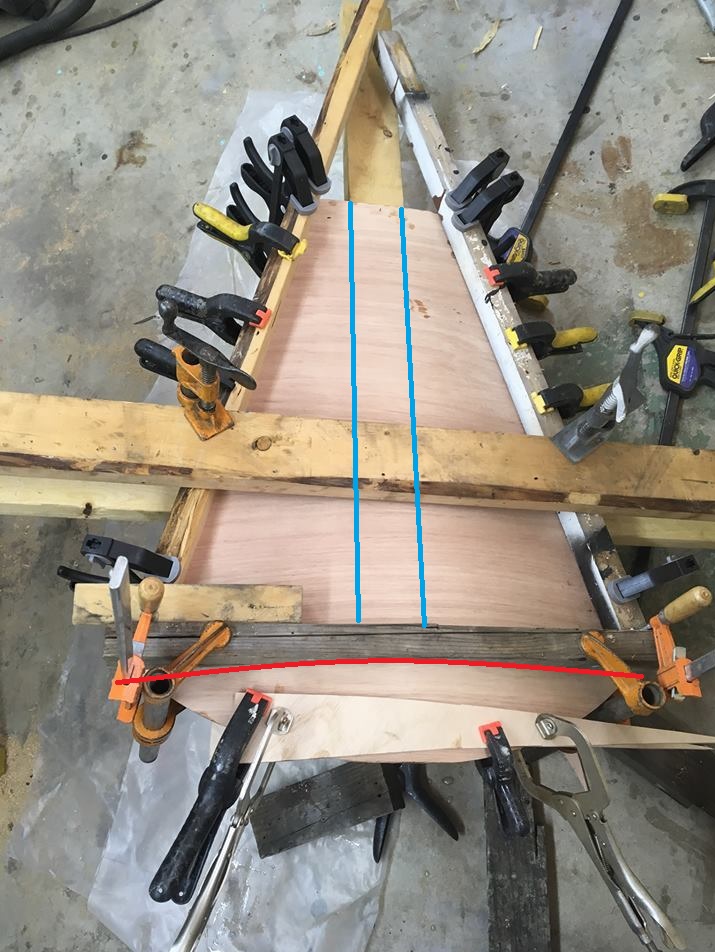 I started with that gray 2x6.  Cut a 2" in 2' curve into it.  Concave part on top, convex cutoff on the bottom.  Clamped with the orange pipe clamps.  That didn't curve the entire transom, so I had to add more pressure:

There's a longitudinal 2x4 in the center of the transom (blue).
2x2's along the diagonal sides.
I have a pair of 2x4's top and bottom sandwiching these and further curving the transom.

The cheapie plastic spring clamps are just there to pull the laminates together and keep the edges straight along the 2x2's.

My brother used to work for a well-known custom boatbuilder in Livingston, MT and he said they used to oversize their curved transoms, screw down the edges, and then cut off the screw holes.  Seems that would have been even easier.

Permalink Reply by Bennett Yarbrough on December 20, 2018 at 6:41pm
Gotcha so is it curved on the bottom? Or flat where it meets the floor?

Permalink Reply by Shawn Baker on December 20, 2018 at 8:09pm
Flat where it meets the floor. Not intentional. I had hoped to curve it there, but couldn't get enough leverage on the narrow end

Flipped one panel end for end so they "spooned". 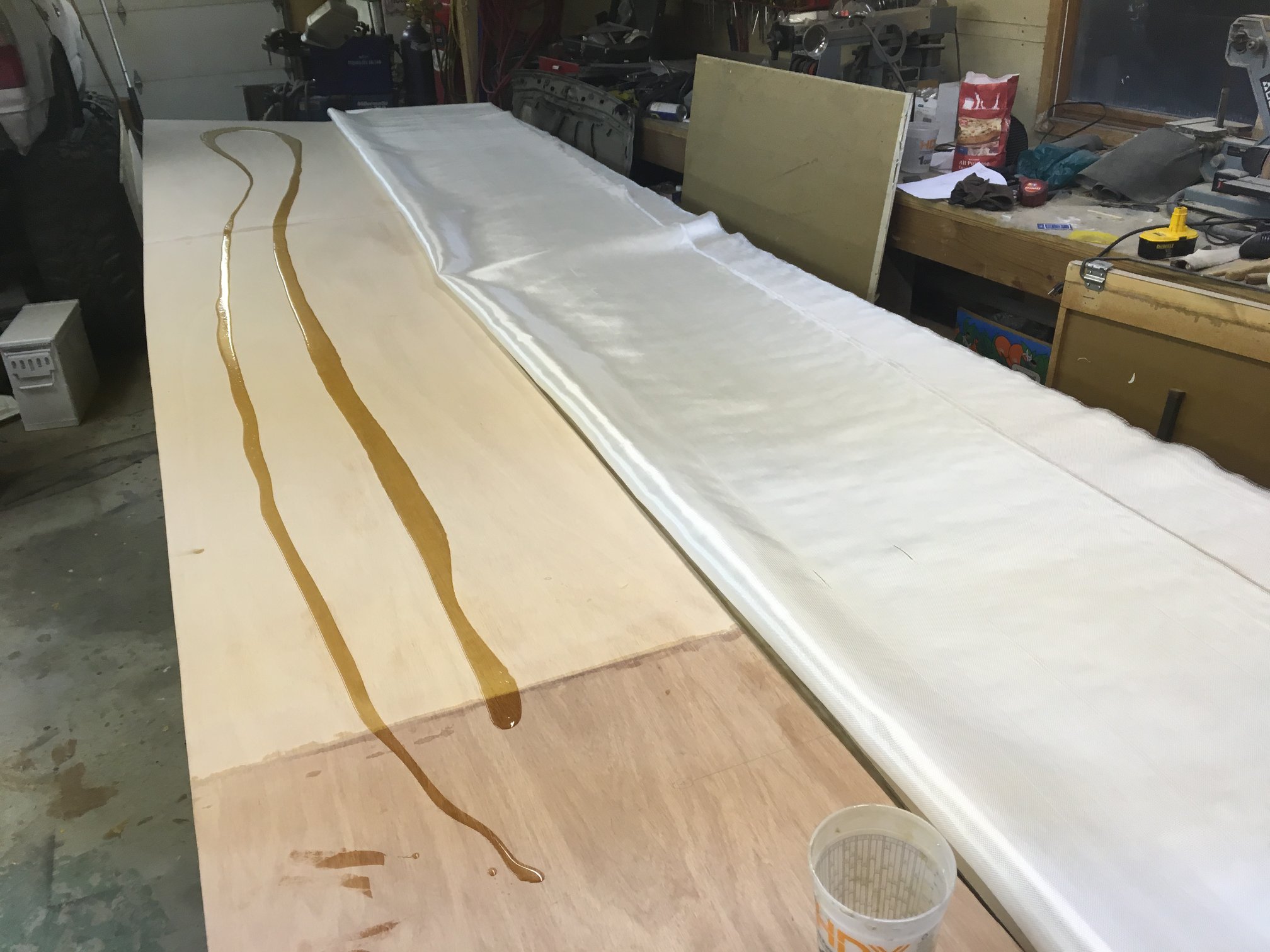 2 layers of 6oz glass inside the side panels
60" of glass just covered 58" of panel width. If you know, you know how exciting this is. 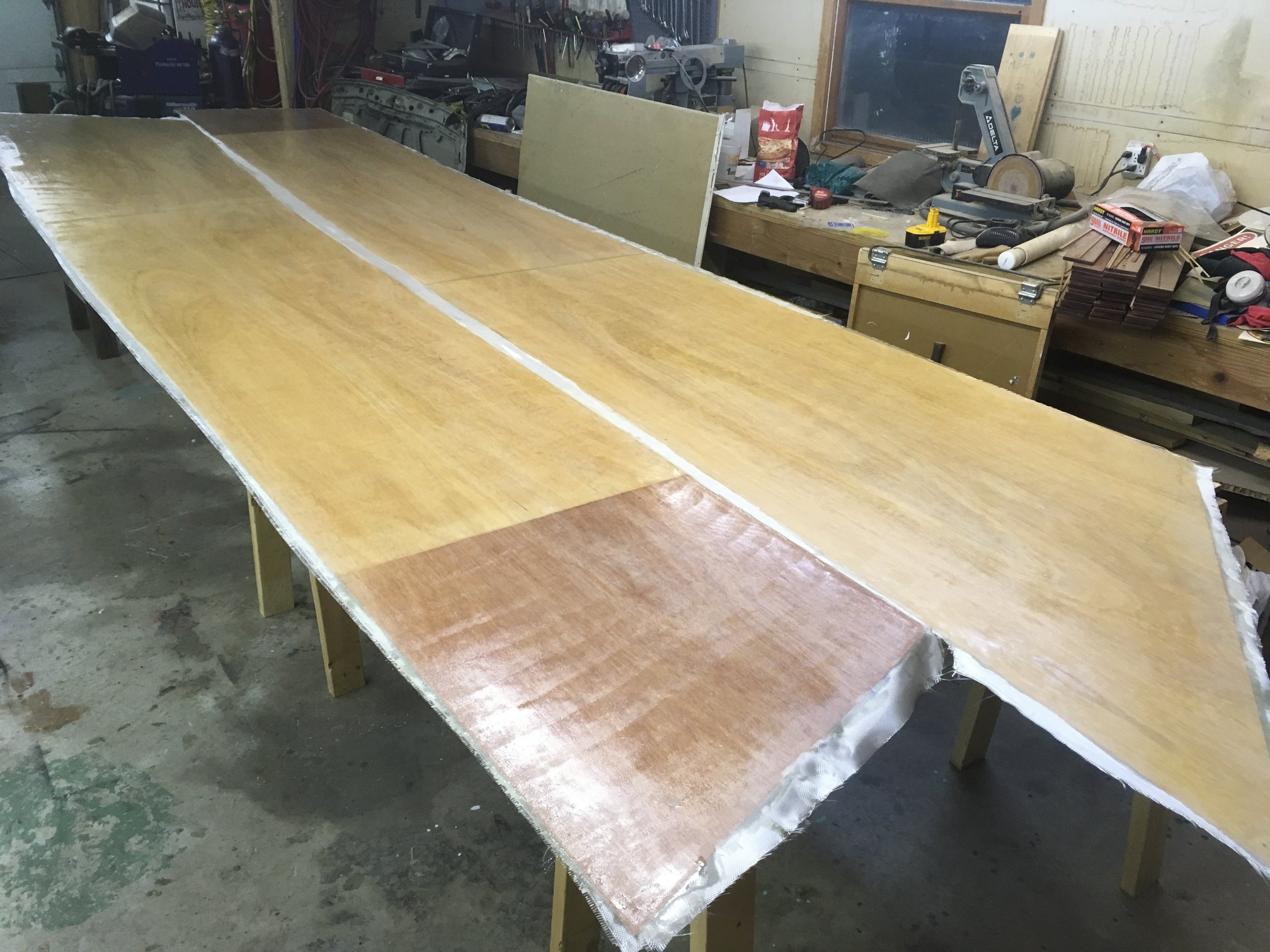 I'm a little disappointed the two pieces of Meranti are different colors.  I may try some aniline stain to deepen the more blonde panels.  I'd like a strip of bright wood on the outside (inside exposed to daylight will all be painted.  Inside the hatches will be epoxy/glass so I can see damage if it occurs)