This will be heavily glassed and painted on both sides, not worried about fir checking

which is better for stiffness and strength as a floor core material?

I hung the roll of glass on a broom handle to pull the glass into the hull neatly. 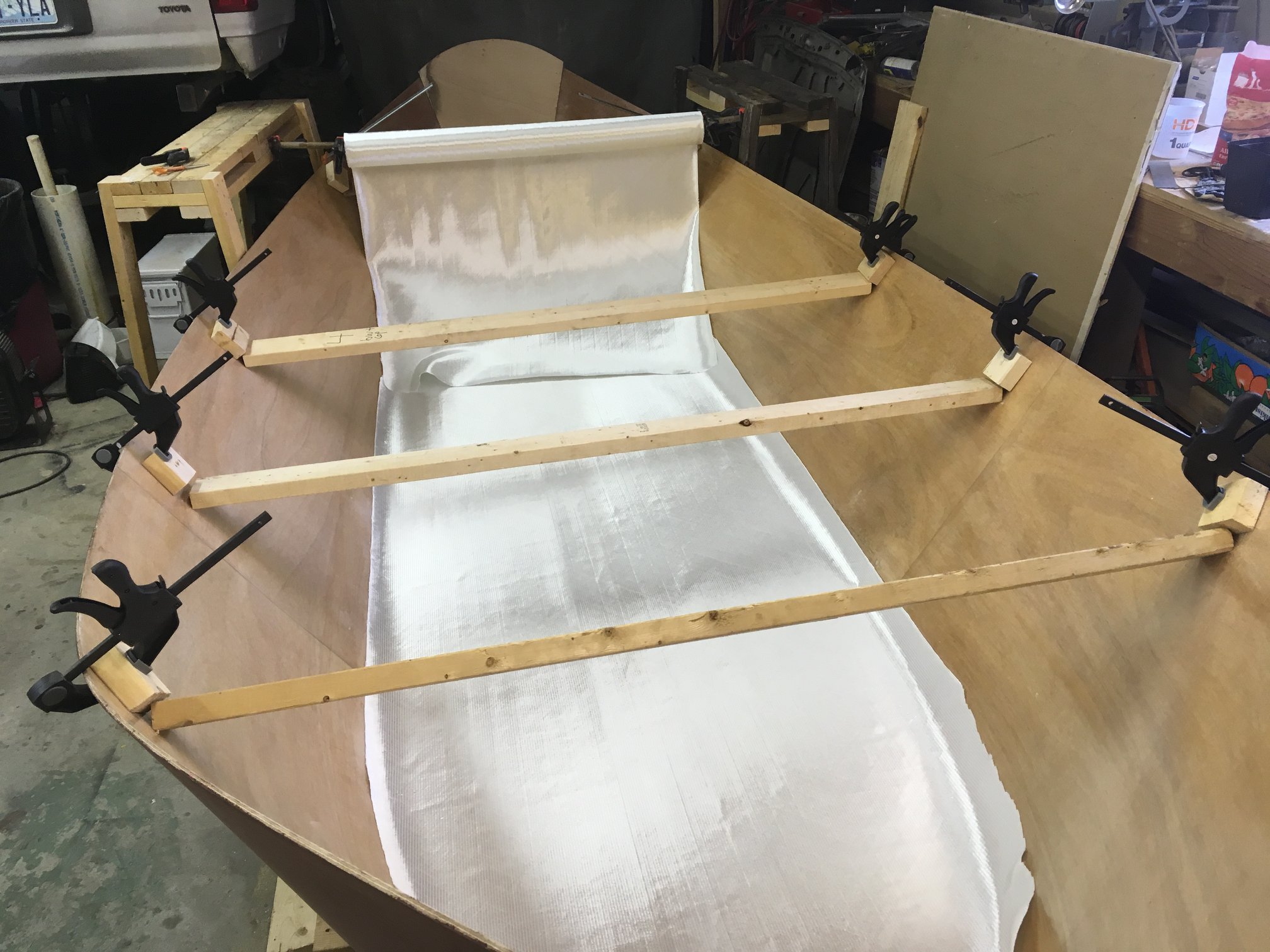 Folded the glass out of the way to pre-wet the ply on the floor.

Then I set the phone down and was up to my elbows in epoxy for a couple hours. 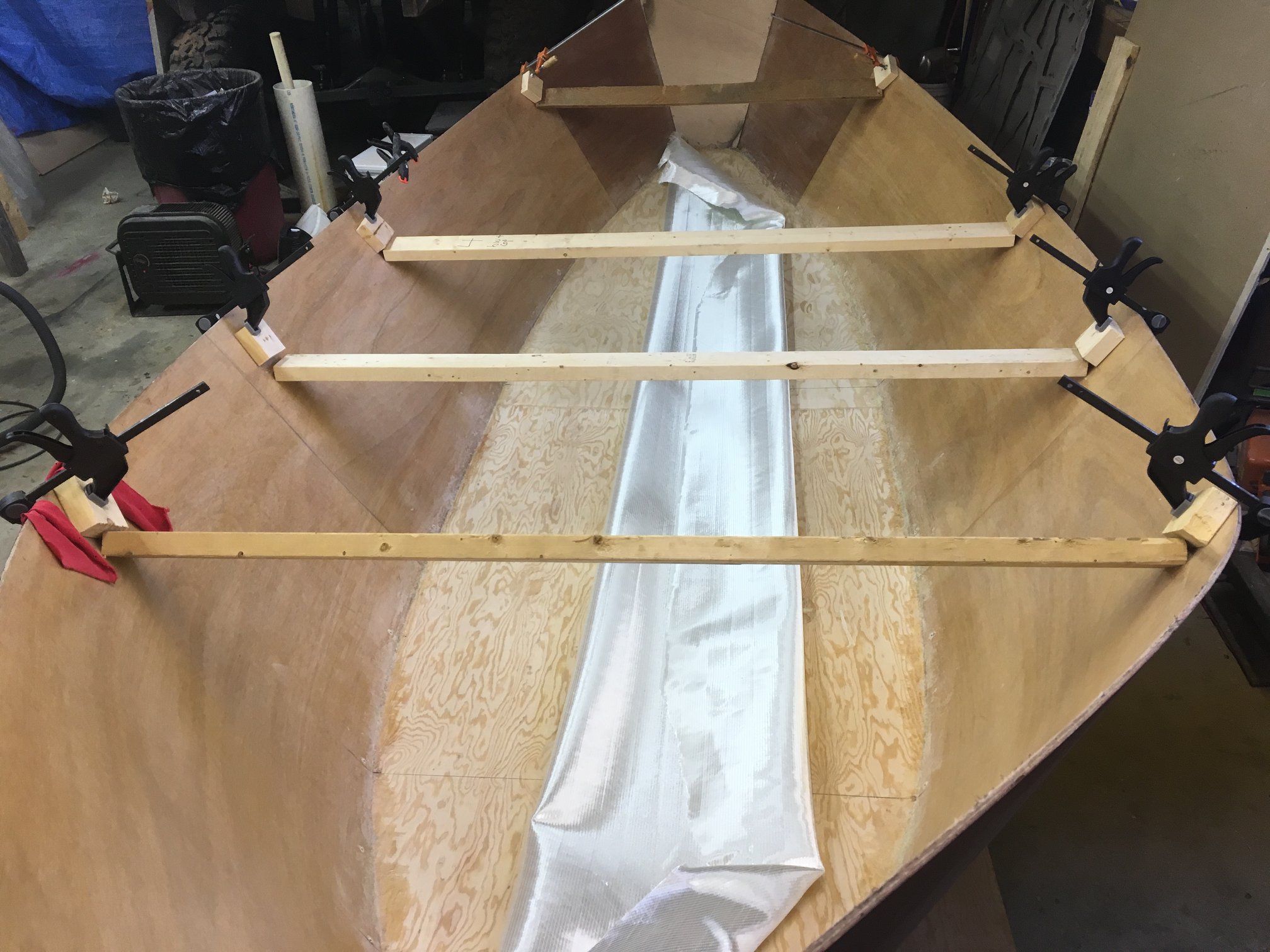 Epoxied. Had approximately 220oz of glass but only used ~140oz of epoxy resin. Folded to saturate the floor ply

To the original question of this build:
I'm sure not impressed with the Hydrotek BS1088 Meranti for the sides.  It's very dry and brittle.  Glad I'm glassing both sides.  The doug fir floor (and bulkeads/decks) is from Roseburg Forest products in Oregon.   Both the veneers and glue joints seem stronger and more resilient.

And some good tech: I had used a cabosil/wood flour mixture in previous boat fillet jobs.  I tried some 1/4" chopped glass this time. WOW!  I'm really impressed how much strength it adds to the epoxy.  Easier to sand than straight cabosil, and it made the epoxy in the mixing cups really resilient.  Add it to the freshly mixed epoxy so it can wet out, then mix in wood flour/cabosil to get it non-sag.  I did short fillets in between the screws on Saturday, then came back with more chopped strand/cabosil/wood flour mix to fair the fillets, wet that out with some unthickened epoxy, and laid the floor glass right over it.  Should be some bomber chines.

Shop was a bit chilly (20°F out, ~60°F inside) so the microwave came in handy to pre-warm the epoxy before I mixed it.  The warmed (but not hot!) epoxy did a pretty good job of wetting out the cloth.  After wetting out the cloth, I went back over it with a heat gun to further spread out the epoxy to get rid of air bubbles, dry spots, and a couple of blobs under/between the cloth.

I've never used a grooved roller for wetout before, but also haven't done 2 layers of biaxial before.  I can see that the grooved roller would be a very good idea for wetting out biax. 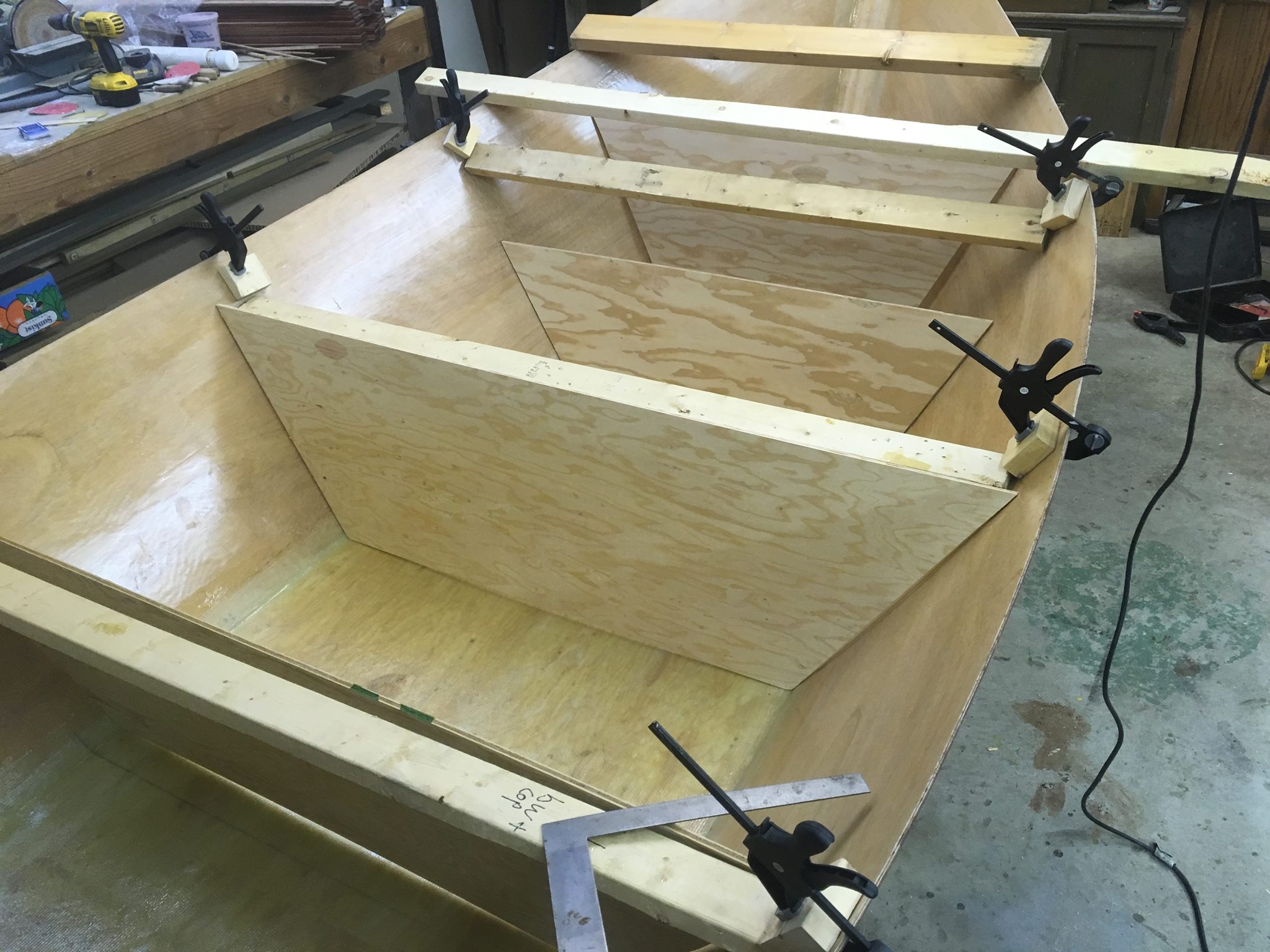 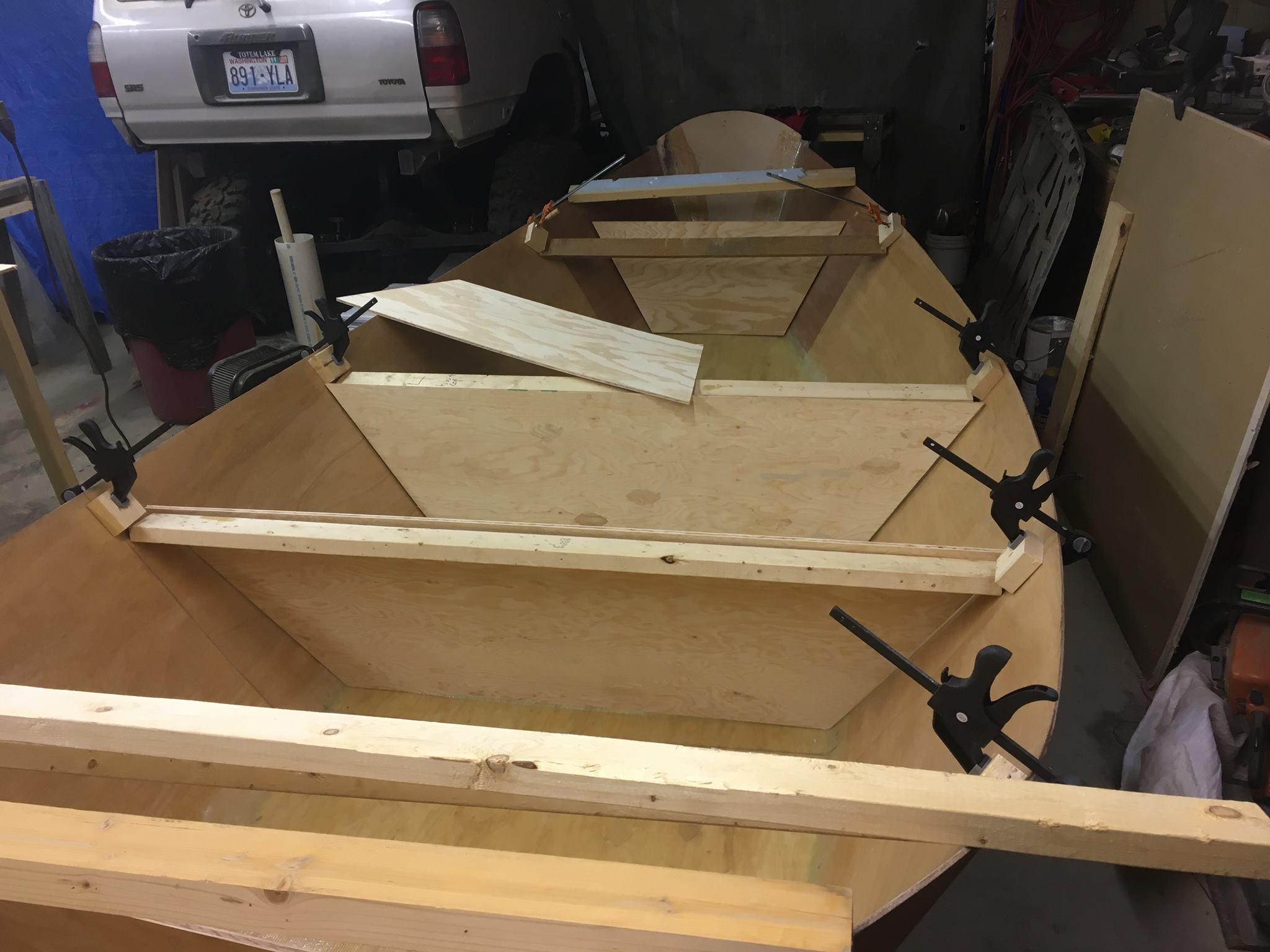 Let’s back up a step or two. How did you get the bottom on?

Floor:
Andy Hutchinson uses freeform construction for the side panels.  Screw together the sides to the stem, then to the transom, all right-side up.  Set the floor ply on the shop floor on 2x4's, with more 2x4's stacked under the bow and stern to get some rocker in.

Another AndyH/HDD builder suggested using blocks around the outline of the floor.   (Not my pic, but I used the same blocks).  Worked great to lace the floor around the floor outline as I was screwing it down. 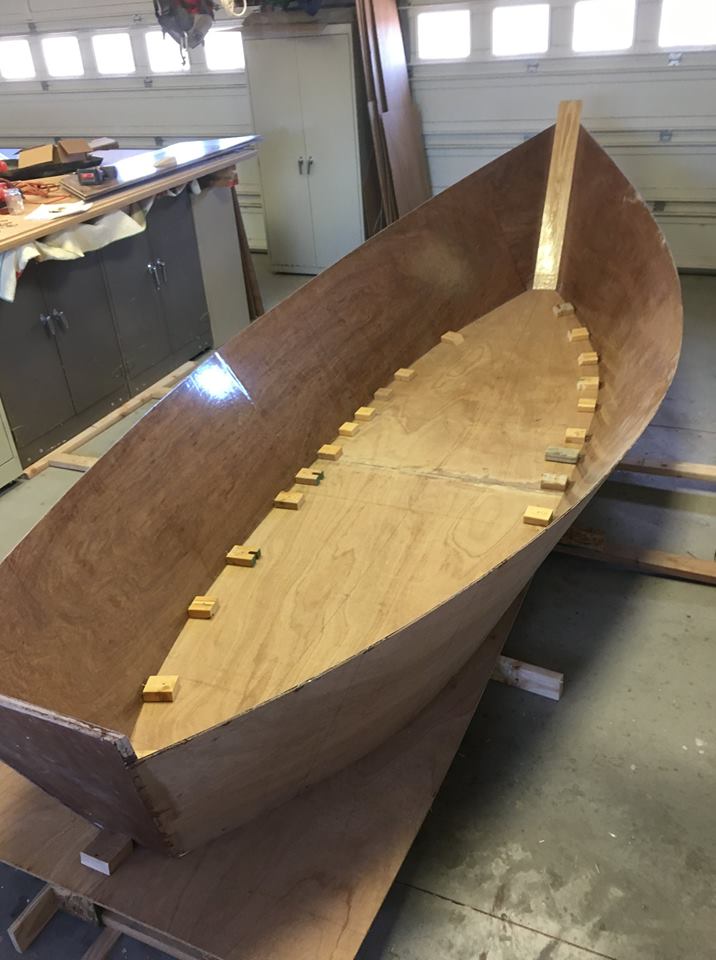 Start by screwing the side panels to the flat of the hull amidships, then work toward the bow, and toward the stern.

Andy recommends 2" deck screws and washers.  I used 2.5" washer-head screws (used for hanging cabinets) from Home Depot.  They're really small gauge, but quite tough.  I only broke one out of 70 or 80 I used to stitch the boat together.  Used some scrap battens at the bow and stern where I'll have a bright finish so the screw heads wouldn't mar the meranti. 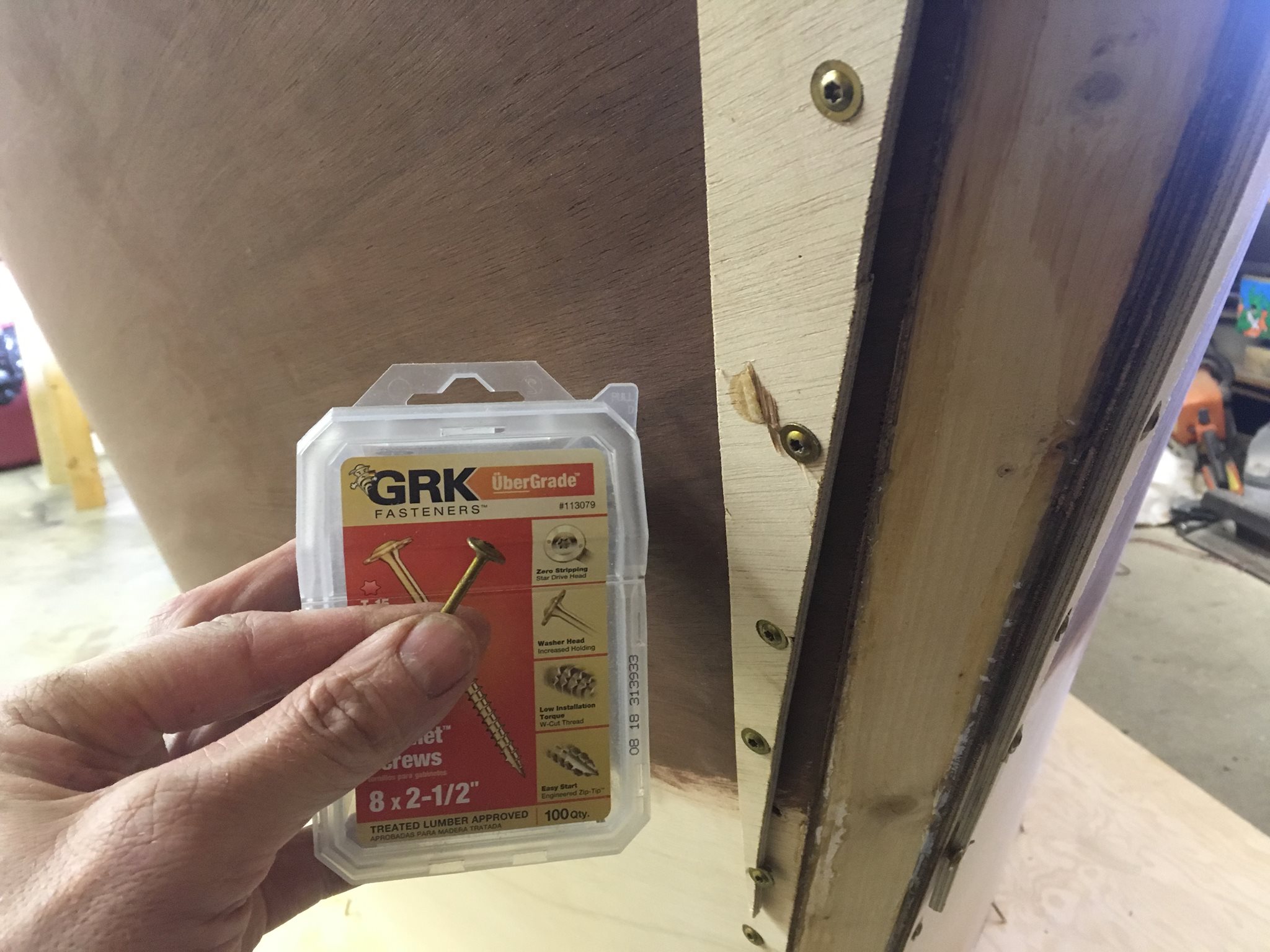 We had to pry up the floor at the bow and stern to get them to meet the stem and transom, respectively.  When we pried up on the floor, it lifted the entire boat, so we had to put in some studs up to the roof trusses to hold the boat down (tip from Pete Culler on Wooden Boats).  Worked great. 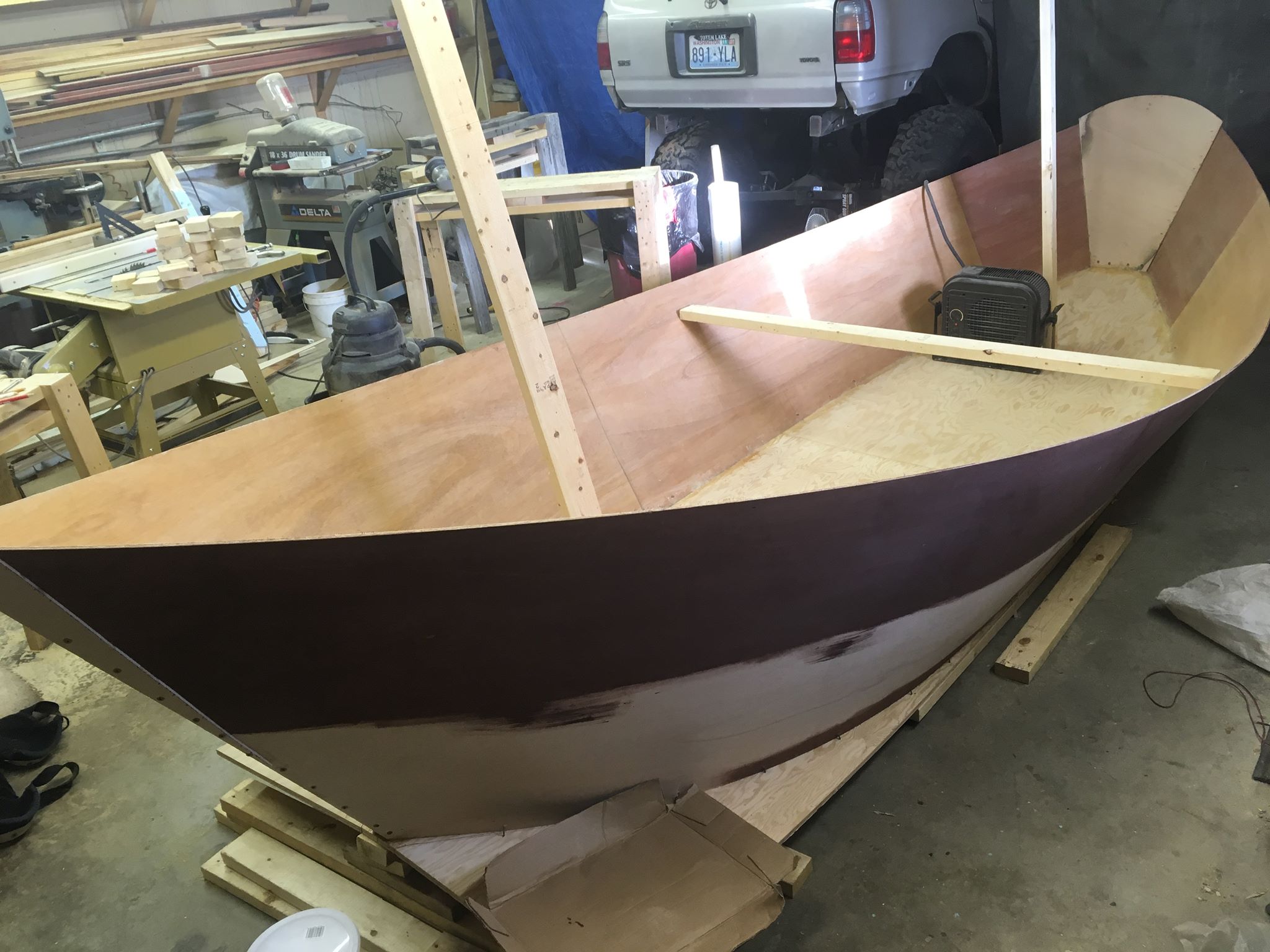 It took a LOT of force to pry up the bow, so I made a relief cut about 1" outside the sheer line so we were only prying the center of the floor that would be attached to the boat, not the entire 48" width. We did stitch fillets between the screws.  I then put spreaders in at the sheer to pull the boat to its final beam while the fillets were still wet so I wouldn't fight them later.  This also pulled the final rocker into the floor. 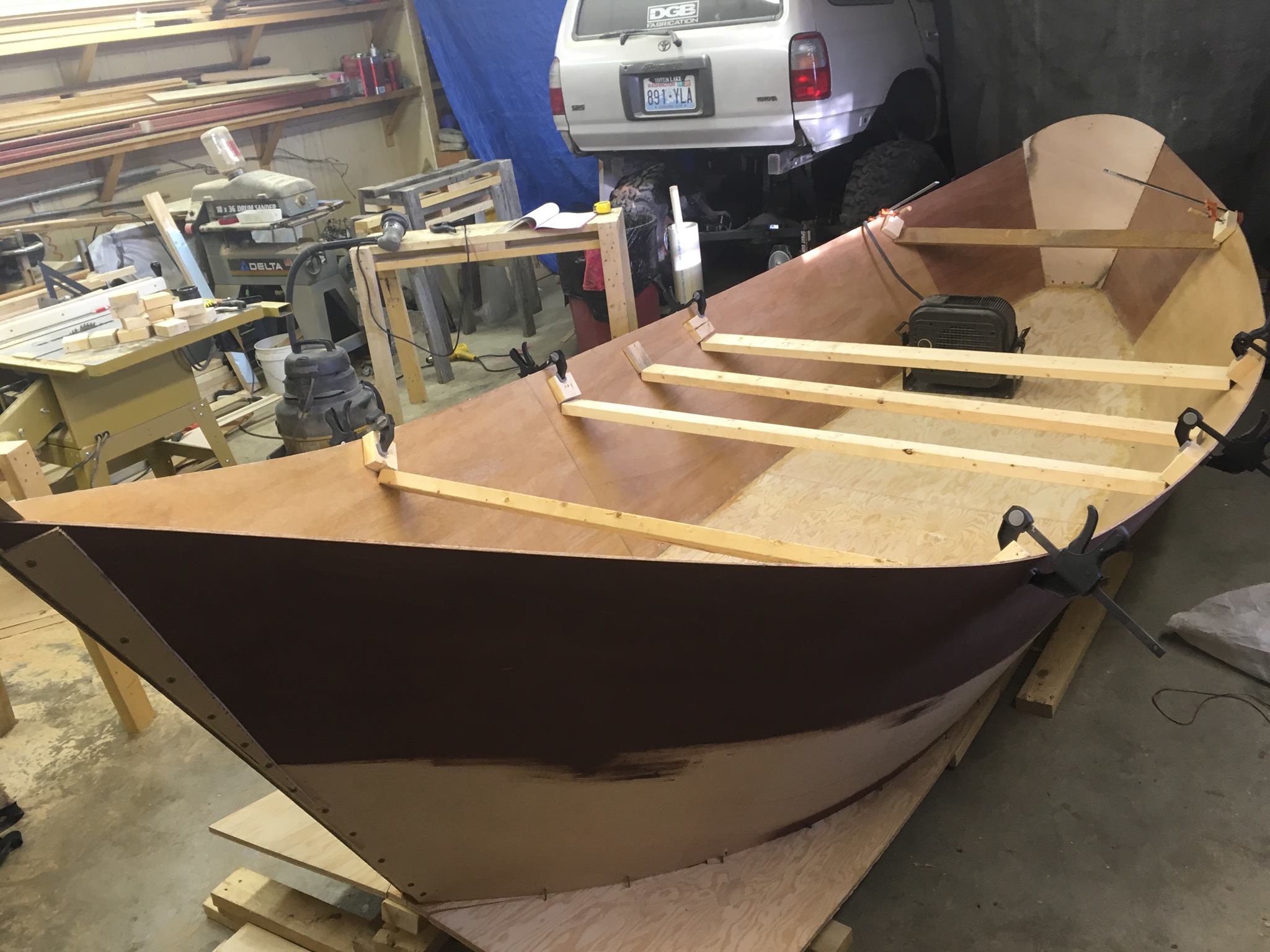 In this pic, you can see the screws through the inside of the chine at the side panels down into the floor ply outside the chine.

After the stitch fillets cured, I pulled the screws and did full-length fillets and then laid the floor glass as noted above.

Day 10: Glassing the other sides of the bulkheads.
Used the $2/yd really tight woven

I don't love it, but don't hate it.   It was difficult to wet out, but it is so tight woven that it should be very easy to fair out for final finishes where it's exposed in the passenger footwells.

Day 11: Set the bulkheads and stitch fillets.  Used a mixture of 1/4" chopped glass, cabosil, and flour.

Day 12: Glassed the bulkheads.
Started with a thicker, smoother fillet as the early fillets simply held the panels in place.

New fillet recipe, used 3/4" chopped glass strands instead of 1/4" Strands
It was too stringy and clumpy, so then I started using a 50:50 mixture of the two with a little bit of cabosil, which was more creamy, and it worked REALLY well.  I used more glass than cabosil, and it should have a lot more tensile strength than a cabosil fillet mix.

Had a couple dry spots.

Floor (left) has a double layer of glass for abrasion resistance.

Day 13.5: glassing the back of the boatman's footwell panels before work this morning.

Time for an update!

Up to Day 20.  I've assembled the boatman's footwell, rough cut out the hatches and decks, stained and glassed the inside of the hatches, built the seats, started putting lips on the hatches (since it will take a lot of clamps), and built a pattern for new bronze oarlocks.

Next up: time to start framing decks. about time for an update...working on decks and hatches.

Mounted the fore and aft passenger seats.  Visqueen is tenting to keep the heat in.  Using a small electric heater in the freshly epoxied spaces Mounted the oarsman's footwell, too. cast the oarlocks.  I need more practice, but I'm on the right track. 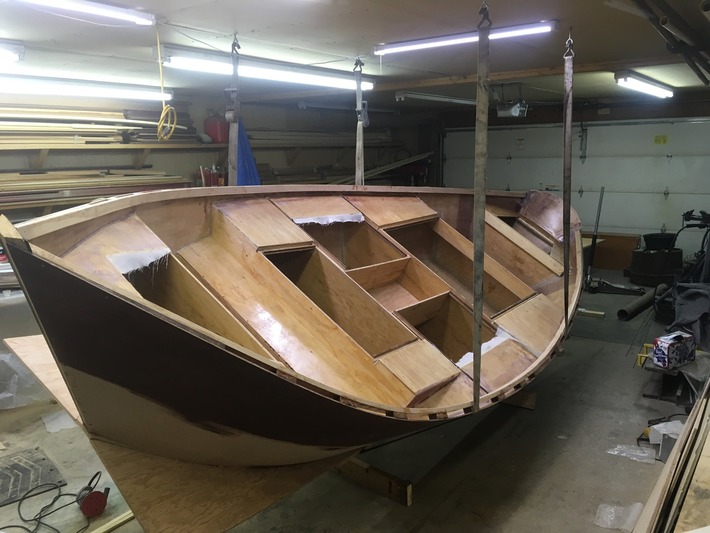 A gorgeous boat and fantastic workmanship.  Looking forward to seeing the final product!