I have been meaning to post this information for some time now.  I just re-discovered the pictures on my computer and decided to share this information.  I might be of interest to some of you builders.

Back when I was contemplating building a DB I decided I didn’t like the look of lap joints common in drift boat construction. I wanted a cleaner looking frame for the boat. So I decided I’d like to use half lap joints between the bottom and side frame pieces. Also I decided there were to be “no screws” in the boat’s hull. Only epoxy would be used to secure the boats frames, sides, bottom, etc.

The problem then is will the half lap joins be as stiff and handle the loads as the screwed lap joints.   I called Gougeon Brothers (West System Epoxy developers) and discussed the issue with one of their experienced engineers.   He suggested I make a sample of the different designs and they would test them for me (free of charge too).   So I made three frames. The first was a standard lap joint with glue and screws, the second a butt joint with a plywood gusset also with glue and screws and the third an epoxied half lap. I made them all to frame No. Five specs and delivered them.

They then prepped them to run the test in their tensile tester and took each to yield. The pictures below show the set-up in the machine. 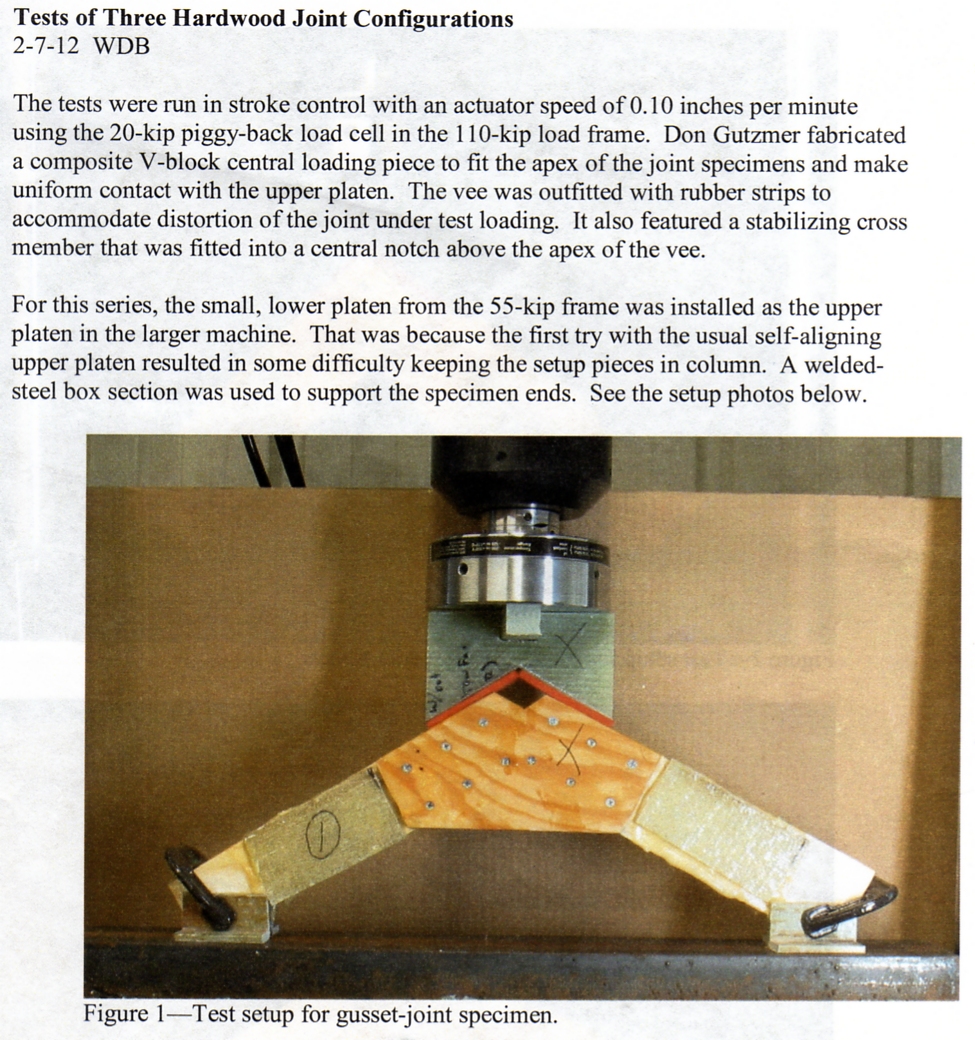 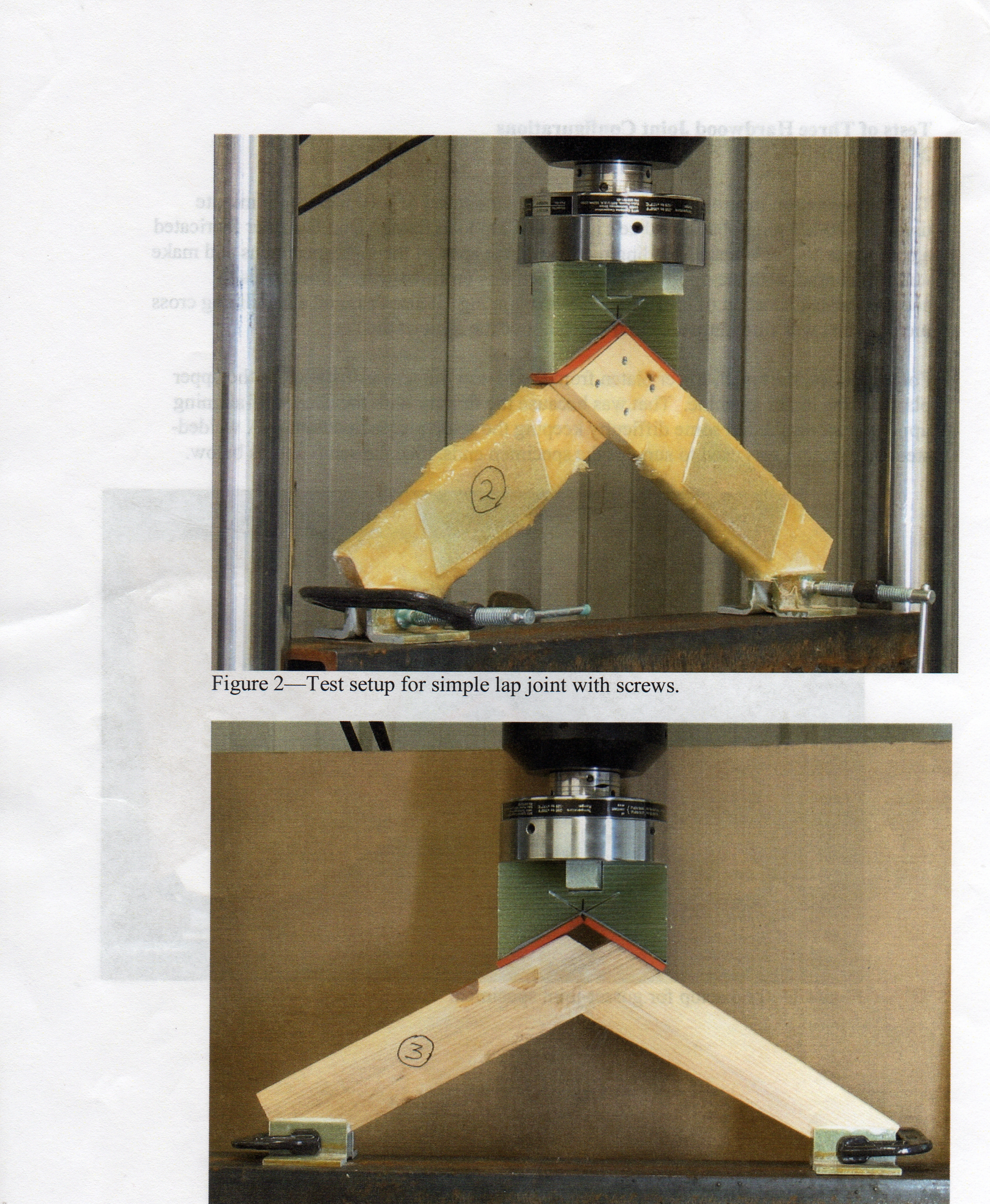 The graph shown in the last photo shows the three curves, force over distance. The first is the lap joint the second the butt joint and the third the half lap. The steeper curve represents the stiffness and the height of the curve the load to yield (fracture).

I went to Gougeon Brothers to pick up the results and the test samples and after reviewing the results with their test engineer decided the half lap joints would be sufficient. 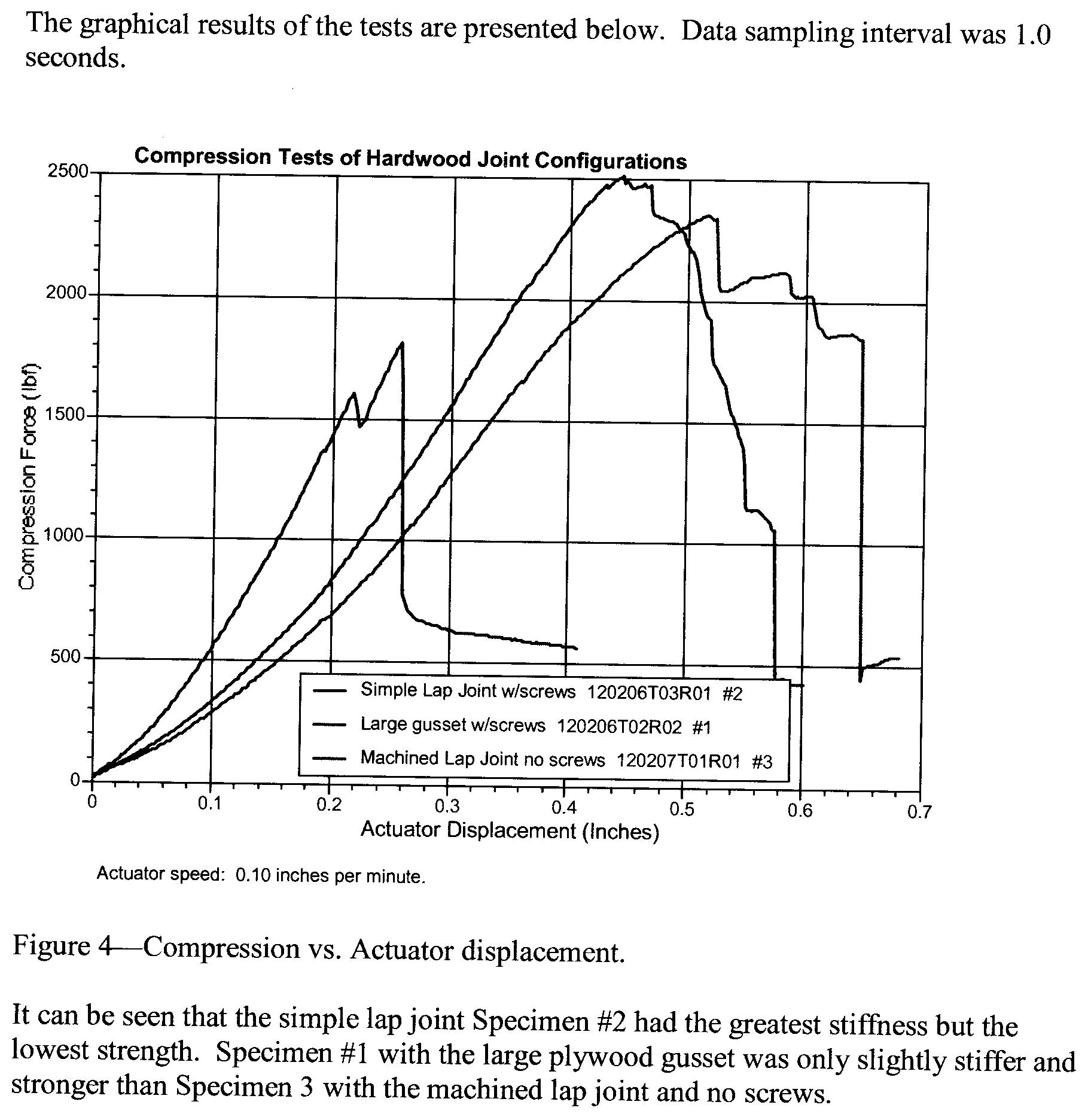 After four years, they are strong enough.

A fun article. For a perspective, though, one must remember that the strength of a frame joint can be quite strong, or just adequately strong without making a lot of difference. Remember, glass boats, or aluminum boats have no frames at all! It's really the rounded hull shape that gives the boat its stiffness. Remember, on a wooden drift boat, the frame's "strength" is only holding 1/4" ply (on the sides). So, the strength of a frame member every foot or so isn't critical but for hanging seats and other stuff on. They also serve as an approachable technology for inexperienced home builders.  Best of all, they make the boat FEEL like a boat!  Greg Tatman

My concerns at the time I did this I had not built anything more than a cedar strip canoe.  Frames, I thought were another whole thing.  As I now look at things from a different perspective.  I see the "light" as you point out in your comments.  My initial concerns were the looks of the conventional frames, I didn't like them and wanted to use 1/2 lap joints for a "cleaner" look.  Anyhow thanks for your comments.  Hopefully others can better understand the Boats features.

Interesting article. However, I don't see why the #2 arrangement would be "stiffer" than the other two. I don't see the same taper in the profile in #2 that I see in #1 and #3. To me, the sides in #2 look strictly parallel. If that is in fact the case, that may account for the increased thickness.

Just a thought. I sometimes get hung-up on details like this.

Permalink Reply by Chris on February 15, 2019 at 3:27pm
Sorry to drag this back up.. As a life long carpenter I also appreciate the half lap without fasteners. My only 2 questions, as I hate to assume, the frames are 3/4” correct? So the lap takes them to 3/8” each? I want to believe in this one but, seems thin..
Chris

Chris, I think the most elegant joint is a half lap with glue and screws, yet I have never done it, as when I think of the actual load the joint demands, it's not worth the time. In the case of a wooden drift boat, if the boat strikes something right on the side member hard enough for the  joint to torque loose, that joint is the least of my worries. It's gonna be doing more damage, and I am going to be thinking hard about being somewhere else besides that boat. Remember too, that if the boat hits a similar object BETWEEN the frames, it's only 1/4" plywood. I am refinishing a 1951 Woodie Hindman, and its plain overlap joints are still holding fine. I wish its 67 year old owner's joints were in as good a shape!! Cheers, Greg

Permalink Reply by Phillip Westendorf on February 15, 2019 at 4:33pm
Greg, If you check my latest post on my build last year there is a perfect example what happens when an object strikes the 1/4” cedar strip side between the frames. Luckily it was easily repaired, not so pretty though. My half laps were chosen for a simpler clean look.
Phil

to add to the discussion on frame joints I'll point out Brad Dimock just does a regular full lap with only two bolts holding it all together. No glue involved.  I think he said he does it specifically for replacing frames after a wreck.  Me personally, if I build another boat I'm going to half lap em for looks