Hi everyone, I'm just getting started.  I've gathered all the tools, read Fletcher's book about 6 times (so great), and read quite a lot of these posts (also great).  I've decided to build a 17x54.  Went to the lumber dealer in town, and decided i'm definitely going to use the Hydrotek BS 1088 6mm for sides, and 12mm for floor.  I'm going to use Mahogany for the Stem.  I'm planning to use Port Orford Cedar for the frames, and was thinking i'd match that with White Oak for the rails/chines.  I hope to have the boat for the rest of my life, and while i want it to be the most beautiful boat ever built, I truly want to use materials that will last and be effective.  So, first question... Instead of White Oak, anyone ever use Port Orford for rails?  It seems like the color would be similar to White Oak, but i wonder about durability as a rail.  appreciate any insight you might have.

Just realized my first post on here was December 2017.  Clearly i have kids, wife, job, and other hobbies... too much going on to actually build a boat.  But man, I love it when i get in there and make progress.

Permalink Reply by Dusty on June 17, 2020 at 7:20am
I'm going to use 20 oz triax for the bottom, and again, fiberglassing is new to me. Should I pre-fill the counter sunk screw heads before I start the fiberglassing? if so, with what?

How deep of a cavity is there to fill?  If just a shallow pocket use a really thickened epoxy (like peanut butter).  I'd use wood sanding dust to thicken the epoxy.  After they are filled just sand the patches fair and then add your glass.

If you went hole hog with the counter bores add a wooden bung in the holes, sand them flush and then glass the bottom.

After the glass is added it wont matter what you used as long as the bottom is flat and fair.

thanks Phil, i'll just thicken the epoxy w/ dust and go that route.  its just the slightest amount for the screws that drove a smidge deep.

I'm back out there.

here's my step by step fiberglass lay up.  Note:  I'm a first timer.

Step 1:  epoxied the sides w/ 1 coat for some protection (I'm not doing fiberglass on the sides)

Step 2 :  filled floor screws that sunk too deep, w/ epoxy thickened w/ sawdust, then spot sanded smooth after they dried  *next time i'd use quick fair b/c its way more sandable.

Step 4:  used the quick fair and smoothed out some scarf joints that were a bit rough, then sanded Step 5:  vacuumed then wiped down with paint thinner on a rag to remove dust

Step 6:  layed the 20 oz triaxial fiberglass on the dry surface and cut to within about 3 inches all around.  marked the fiberglass with a sharpie at the stem as an indicator.  Cut extra 5 inch strips for each side because mine's a 17/54 and the fiberglass came in 50 inch width. 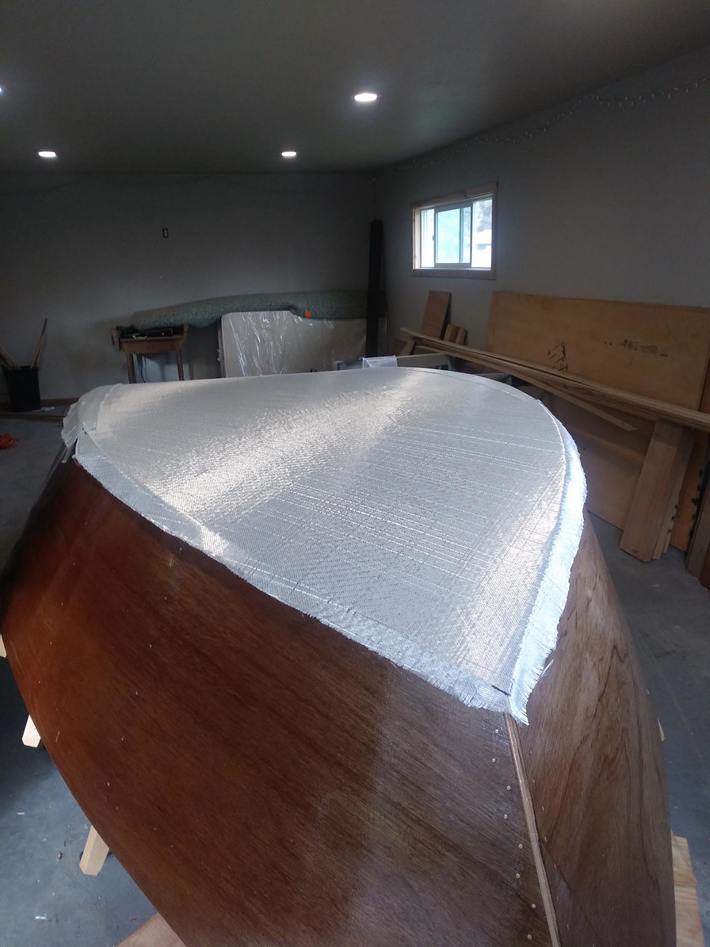 Step 7:  carefully removed the fiberglass - rolled up and set aside then masked off the sides w/ tape & paper

Step 8:  rolled a coat of epoxy on the wood, after about an hour it was tacky like tape. 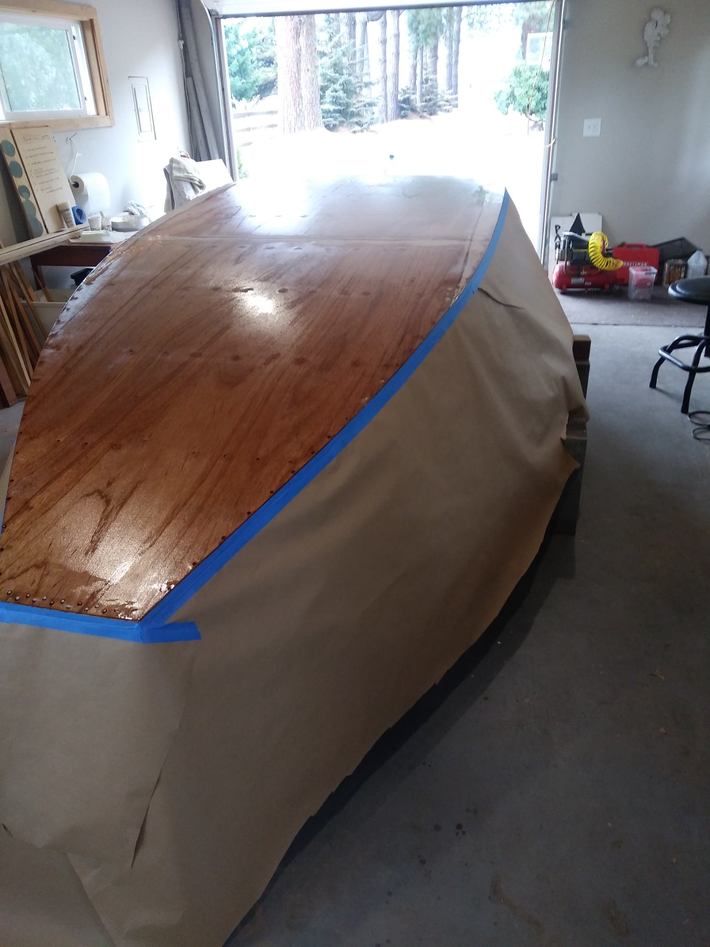 Step 9: Since i'm doing the chemical bond epoxy method (vs mechanical bond) I lightly unrolled the fiberglass back onto the slightly tacky surface.  had to lift and adjust it which wasn't a problem because it was only slightly tacky.  Aligned the sharpie indicator marks with their respective location.  Saved the thin 5 inch strips for later.

Step 10:  poured and troweled epoxy about 9 oz at a time, starting in the middle and working out  for the next 45 minutes.  I learned that there's no need to be aggressive with the trowel during wet out.  just move the epoxy to a fairly even film and let gravity take it from there.  More pressure is needed when removing excess epoxy and removing air bubbles. Step 11: added two more coats of epoxy, each time waiting until it was tacky, like tape.

Step 12:  trimmed the fiberglass with a razor. (I'm not doing the wrap it around the chine joint method)

Step 13:  about a day later, i added another coat, this time included the graphite dust -  1.5 tablespoons to 9 oz of epoxy.  I learned that I can recoat the epoxy without sanding as long as it is within 72 hours. here's what it looks like with 1 coat of the graphite infused epoxy.  I'll end up putting two more coats on I think.  for a total of 6 coats. 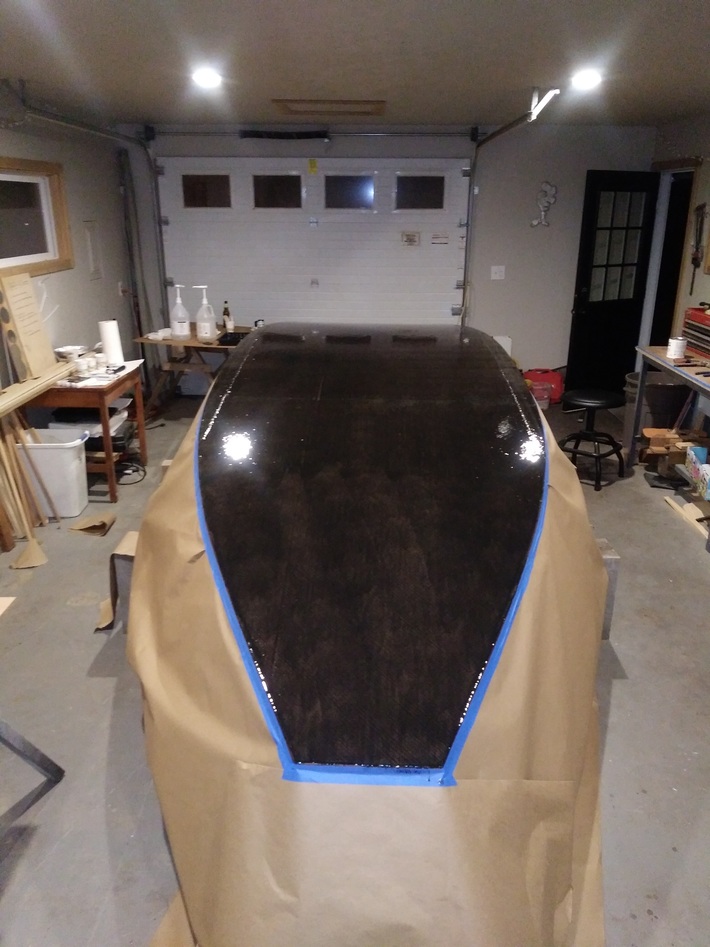 I'll add pics of the last two coats when its done.

Thanks for the thorough ply by play. It makes it easy for those who follow in our boats' path's to follow along! Good pictures too!

Permalink Reply by Dusty on Saturday

Permalink Reply by Dusty on Saturday

I'm going to install the chine batten using Silicone Bronze ring shank nails.  I'll pre-drill with 5/64 and I'm going to bed the batten with 5200.  Should I use a detergent for the nails? I know it is recommended for screws, but nails?

Permalink Reply by Dusty 13 hours ago

Do you think I should countersink just a tad for the nails? so the head sits at or just below the surface?  or is that overkill?

Like Rick said "Careful hammering".  Just use a hammer to set the nails flush with the surface of the wood.  Don't go wacking the nails too hard and leave a hammer head depression in the wood.  No need to c'sink the head.