Got the Glen Canyon bottom done, rolled her over, bolted in the seat rails, and got the first pair of gunwales on. Boat gets delivered a week from tomorrow, so I guess I'd better get back down there and get after it.… 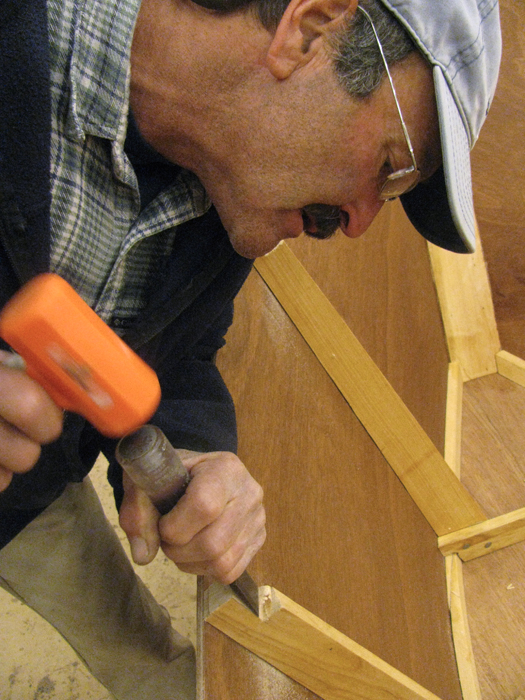 Last night we put the bottom glass on the third boat, now christened by its to-be owners, "Glen Canyon," as that is where it will be used (the 15-mile stretch from Glen Canyon Dam to Lee's Ferry). We're getting a little smarter about pre-marking the placement of the glass and the shiny plastic top-sheet, so it is all coming together much quicker than earlier attempts. Today I'll peel the shiny plastic off, graphite the bottom, and give the light Meranti panel a coat of dark varnish in hopes of… Continue

Last night we figured out how to build up the chine glass in a precise fashion, while at the same time finding a use for those pesky empty wine bottles cluttering up the shop.
Pre-cut and center-mark the glass tape, making a similar center-mark on the boat.
Impregnate the tape on the plastic-covered workbench.
Roll the tape onto wine bottles from each end, stopping at the center-mark.…
Continue

This morning I managed to cut a chine log about a foot short, which pretty much shut down operations, as that was the key stick to move forward. So we were lucky enough to get most of the day off to catch up with our lives instead of the boat mania. The new scarf was cooked by this evening and I lurched onward.
The Panel Truck--moving 20' panels in and out of the storeroom.… 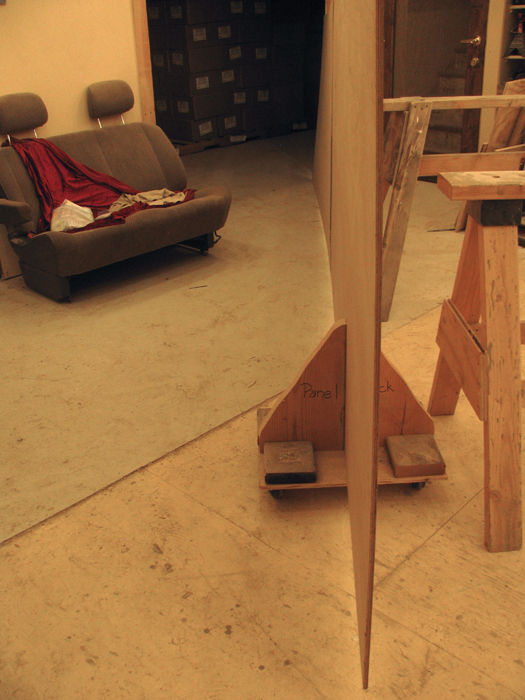 Euphrates flew up to the loft today, where she'll hang out for final fairing and painting. Downstairs the next boat took shape. I sure wish all the other parts of building a boat were as fun as the hour-and-a-half of pulling a hull together. What fun. Here's hull #3, as yet unnamed. It'll be an open Rogue of the same style as the first two, but with the traditional wood floor, inner chines, etc and no decking. Epoxy/glass exterior, oiled interior. An all new odd assortment of boatbangers… Continue

Work Stacking Up at Fretwater

We rearranged the boats today. Love that ceiling winch! Getting ready to evict the first two boats as we get to the end of my part of those and get ready to build the next one.
Easy deck sanding with Dan's cordless: 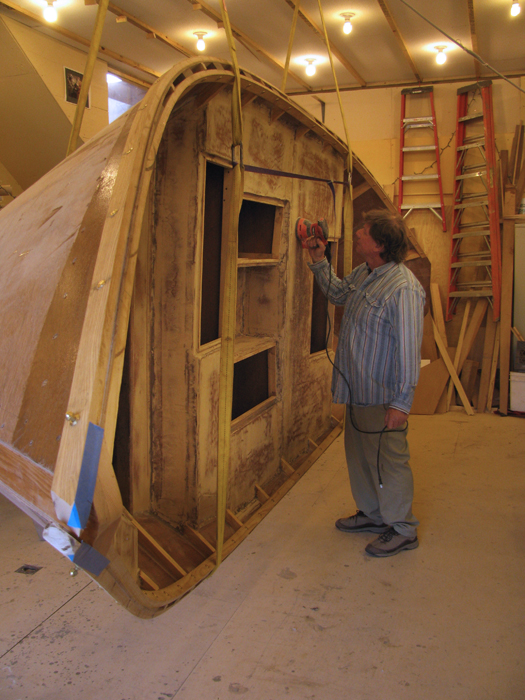 How we exchange boat places without a passing lane:…

Things are churning along--we laid up the bottom of Lodore last night and dropped it on this morning. Even though it is a bad time to be a publisher, there are a lot of other things you can do with crates of books: 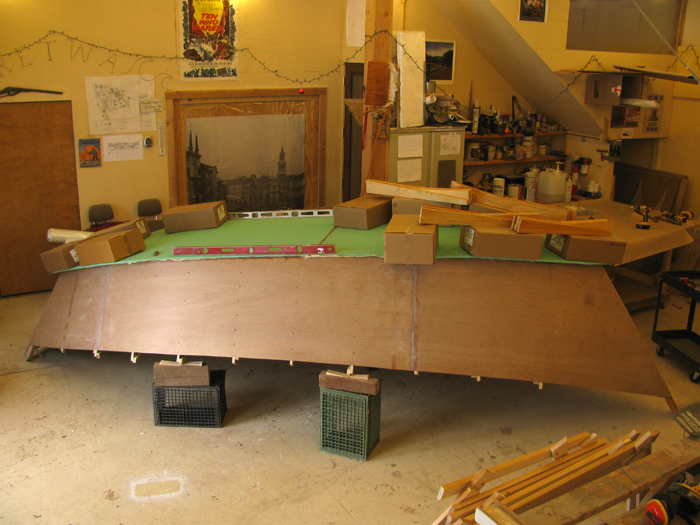 By the way those books are all for sale at www.fretwater.com if you need any weights.…

The Euphrates is now ready for her deck glass, and Lodore almost ready for her bottom. Meanwhile, the unnamed open Rogue's Port Orford Cedar ribs are soaking up LTV (Linseed/Turpentine/Varnish) and wondering when the other boats will get out of the way so she can take shape too. I'm supposed to deliver her in a month!… 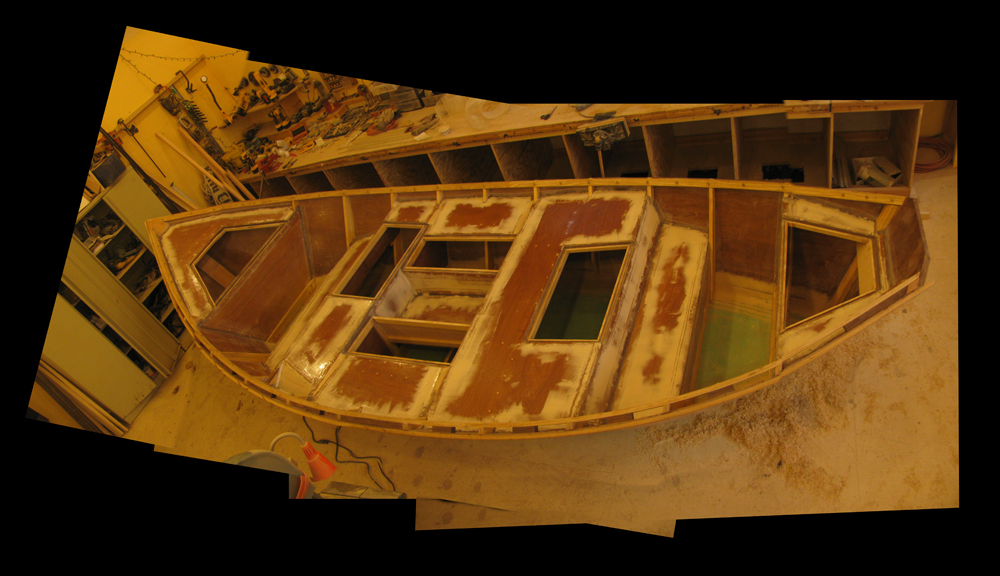 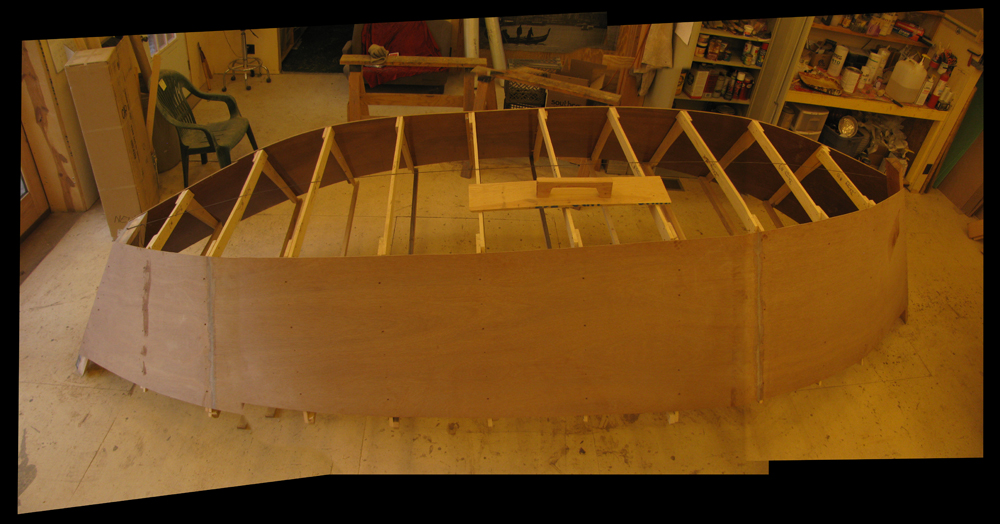 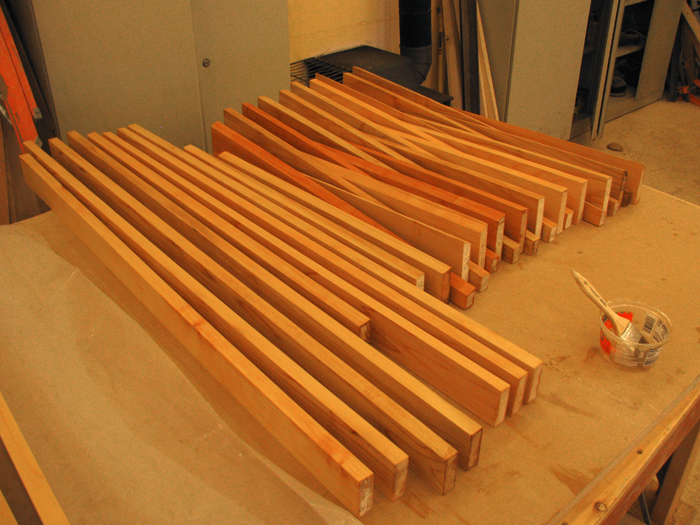 Reconciling the plans for the boat with the actual shape of the early 1970s Briggs boat upstairs has been an adventure. We tweaked the lines severely for the Euphrates, then retweaked a little last night on the Lodore. Once we get the shape that looks right, I carefully redraw the plans. I think I'm finally where I want to be with the lines, so the third boat should be a breeze.… 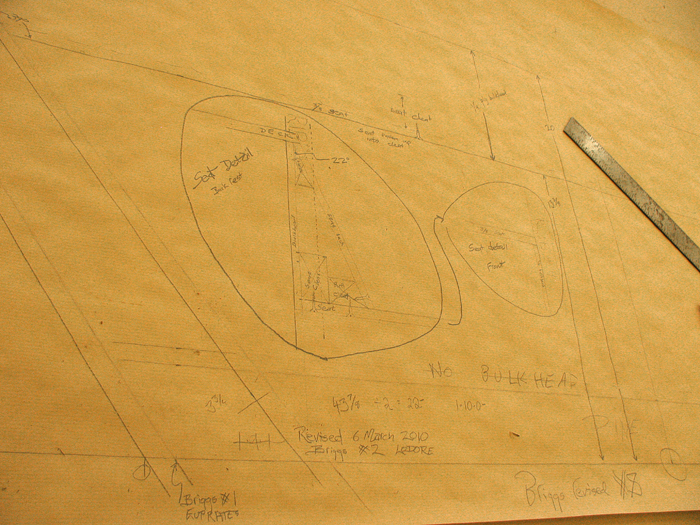 Here's a couple shots of the morning after. I was astonished to run a centerline on the new boat and find every rib to be dead center. Even a blind pig fins an acorn once in a while.
The large tool sitting on the boat is an edge fairing device, to bring the raw edges of the sides into the same plane as the temp ribs. It has 36-grit sandpaper glued to one edge. This wacky system I am using, with no inner chine log, makes it tough to define that edge plane without some sort of giant gizmo…
Continue

Boat #2 got a start last night when about half the WRF first aid class came over with energy and sixpacks. Lodore is looking a lot less like a pile of sticks now. The temporary ribs are in place. Bottom goes on soon, then boat is stablized, flipped, temp ribs removed, inner chines glassed, the final Port Orford ribs installed. Of course the party inevitably ended badly. The WFR class may have some hangover issues today.… 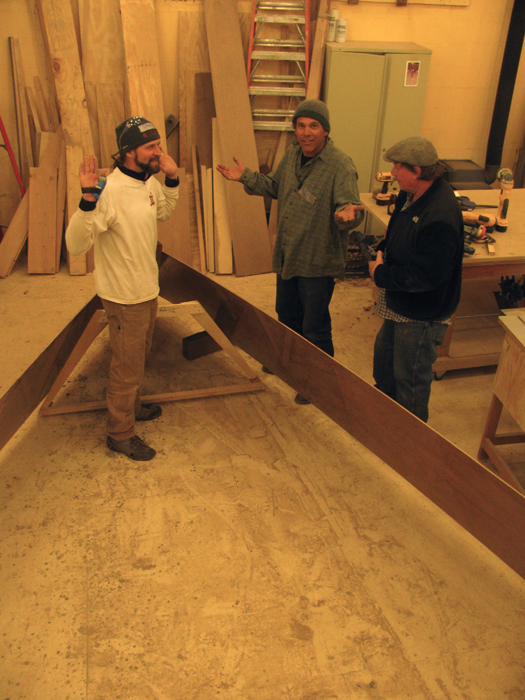 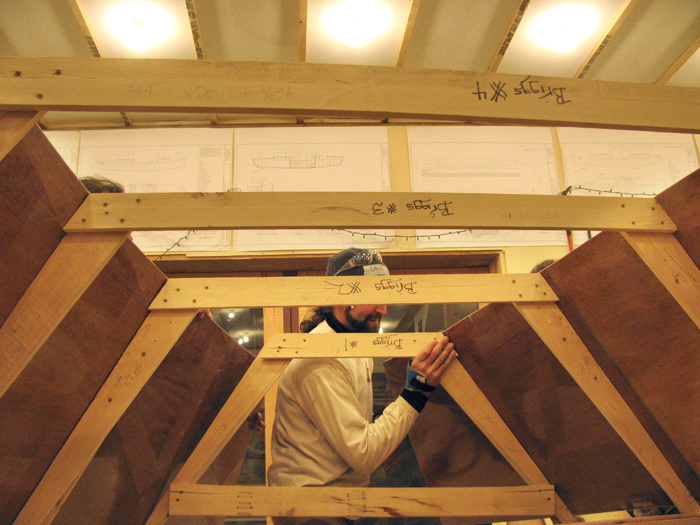 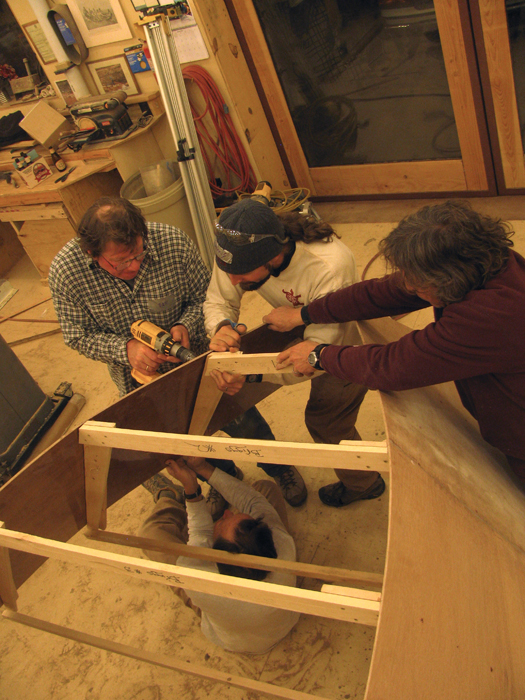 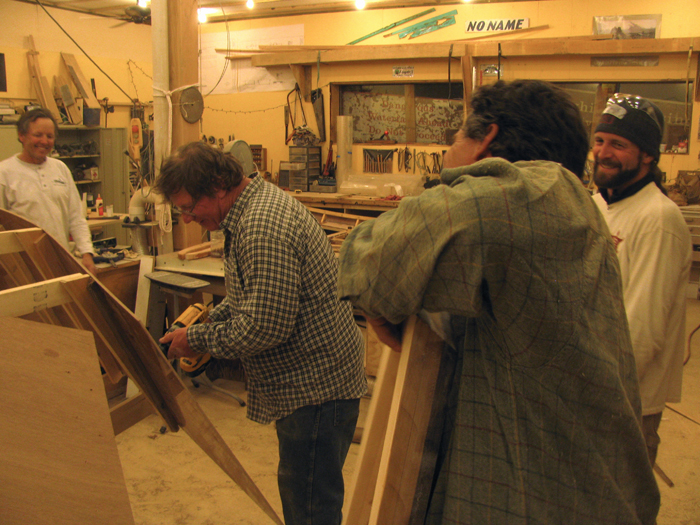 Dory # 1 is about done, ready to glass the decks, trim the gunwales, splash some paint on her and send her on her way. #2 is starting in the prep stages, scarfing and glassing sides. Rib production starts tomorrow.

#1--new boat "Lodore" side in foreground; Euphrates in background. Old river signage outside windows holding back the avalanches (Flagstaff…

The Euphrates is looking a lot like a dory now. Ash gunwales on, decks framed and covered. We have a fair amount of glass work yet to do as well as the hatch lids, latches, and oarlocks. Trimming the bowpost and transom, rounding and oiling the gunwales... Little details that take up big time. We're starting the next boat in the far side of the shop so we can be working on one while the WEST is kicking on the other.… This is the simplest scarfing jig we've come up with so far. A piece of melamine with a slot in it, set on a stack of staggered Meranti plywood. 10 scarf joints in about as many minutes. A little belt sanding cleaned up the rough edges. This pile of wood is for the sides of two more Briggsian dories which are in line after the Euphrates is out the door. A bit about the Euphrates

This boat is for Dan (Dierker), my very good friend. He ran dories for Martin and later for OARS, after OARS bought Grand Canyon Dories. We both work for Arizona Raft Adventures (AzRA), as does Dennis, who is in on this project and next in line for a similar boat. AzRA runs dories now and then, so we hope to be floating both of these and my 1972 Briggs on an August trip. Dan is following the old Martin Litton tradition of naming it after a place that's been buggered up--in this case the… Continue 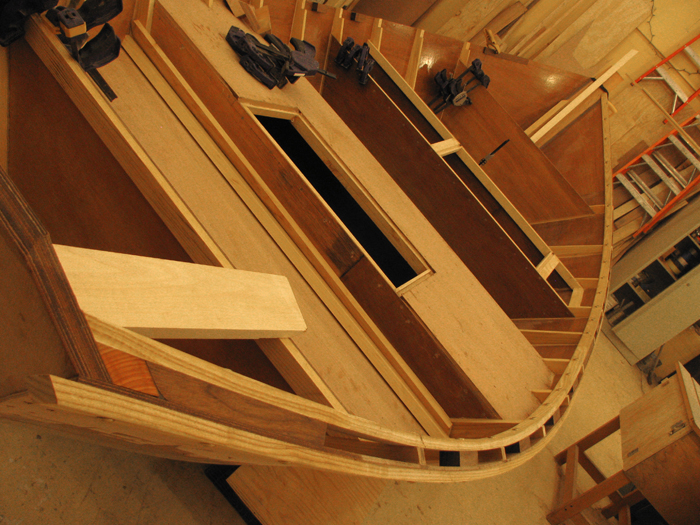 Framing in the deck. Dropping in ribs with bulkheads Bottom on, glassed, and covered with stiff plastic to make her smooth and shiny.