To my utter amazement, I made it through Grand Canyon in the 48-inch-wide Edith upright. She's a wet and wild ride, but ballasting is a miraculous cure for a cranky little boat. Here is Granite Falls, one of the wilder rides, and one that I'd been dreading since the onset of the…

The Edith in the Big Drops

I just posted a few videos of the Edith—the Kolb boat I just finished—running the Big Drops in Cataract Canyon last week. That is one wet boat, but hard to pivot!

I haven't found the way to downsize these for the web without losing  lot of clarity. Oh well. Check 'em out at:

I head to Lee's Ferry with Edith in the morning for a Grand Canyon run.…

Edith had her debutante party today. She's way fast, and very easy to right. Let's hope I get to do lots of the former and not too much of the latter. Other than putting her name on her bow, Edith is pretty much done as of midnight tonight. Although there are a few days of tinkering and accessorizing left, Edith really came together this afternoon/evening. Pretty exciting. I'll fiddle around with her tomorrow and Sunday we will take her out to the lake for the big experiment. Does she really float? Will she stay right-side-up? I'll let you know. Anyhow, here she is. Lots more pictures and stories at…

I screwed Edith's decks on today. She really looks a lot like old Julius, with one big difference: a foot-and-a-half longer and nearly a foot narrower. Hugely significant numbers. It makes me realize how much Holmstrom was looking at the Galloway boats for inspiration and the Oregon boats for common sense and stability. Buzz really was a genius. 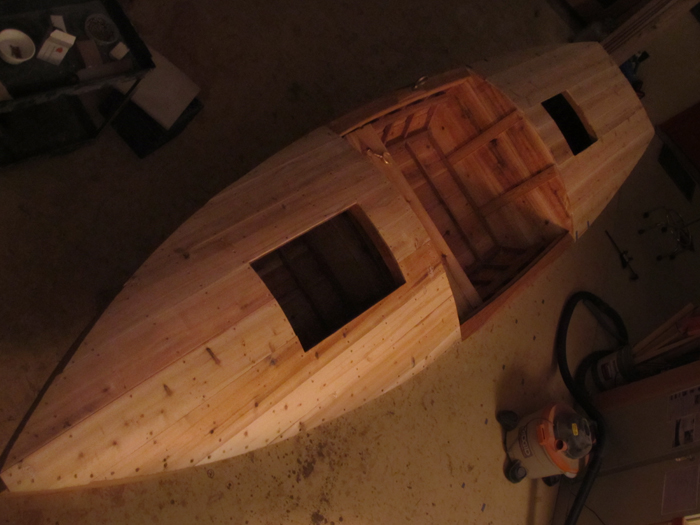 Listening to the wood.

Here is a quandary I just posted on my blog (fretwaterlines.blogspot.com)

Ten years ago when we built the Julius, a replica of Buzz Holmstrom's beautiful, home-built 1937 expedition boat, Roger Fletcher and I ran into some serious design issues. As it turned out we had been trying to reconcile two set of photographs of the original boat, and the second set, I finally realized, had been taken after a subsequent owner had sawed two feet off the stern. Little wonder that our hull…

Well, after a few well-deserved setbacks, we riveted the final strake onto the Edith yesterday, and will roll her right-side up in an hour or two. She sure is cute--I fear all the boy boats will be hitting relentlessly on her. Here are a couple shots. Lots more on fretwaterlines.blogspot.com 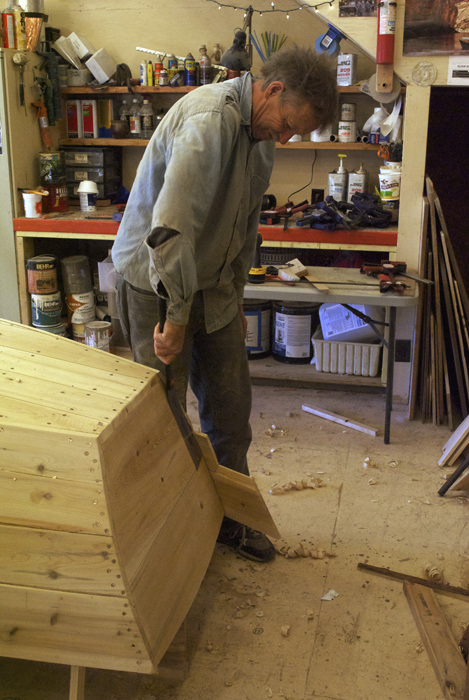 I finally quit dorking around and got the strongback pretty much together for the Kolb boat. This will be the first true Galloway boat built since the early 1930s I think. Buzz Holmstrom built his modified Galloway in 1937, which we replicated in 2001. Although the lines and construction were similar to a Galloway, Holmstrom's Julius F. was a foot shorter, a foot wider, built of better wood, and was all-in-all a far superior boat according to contemporary river runners. As I walk around the…

Although I will continue to post entries here that are particularly pertinent to wooden boatfolk, I have finally started a blog for myself that will include not only the progress on Edith, but other ramblings as well that do not need to clutter up the Wooden Boat People pages. If you get a hankering for more details and tangents, look here:

Well, I'm committed. Or should be. Just received the first half of the lumber for a replica of Emery Kolb's EDITH, which was built 100 years ago this coming summer. The EDITH and its twin, DEFIANCE, rowed by brother Ellsworth, were built out of white cedar planking with white oak framework in Racine, Wisconsin. Brass screws, copper riveted lapstrake. My favorite style of building. The brothers launched in September in Green River, Wyoming, and followed Major Powell's route down the Green and…

We got in last night from a 15-day Grand Canyon trip with two virgin Fretwater Briggsian dories, Lodore and Euphrates, a virgin Alumiweld named Wesley, my old Briggs Cataract, and Andy Hutchinson's firstborn--a 16-foot Briggsian shorty named Woodenshoe. Grand Canyon was running a steady 8,000 cfs and was oh-so-peppy in many places. Wesley flipped in Horn Creek, Woodenshoe did an extended side-surf in Lava without flipping, and the rest slipped through. Here's… Continue

Last night the last two boats left the boathouse for a test float on the lake. The shop is empty! They were joined by a brand new AlumiWeld from Rogue River Boat Shop. All three will launch Sunday from Lee's Ferry for a commercial trip, along with my '72 Briggs and an Andy Hutchinson dory.
Dennis tries Dan's boat: 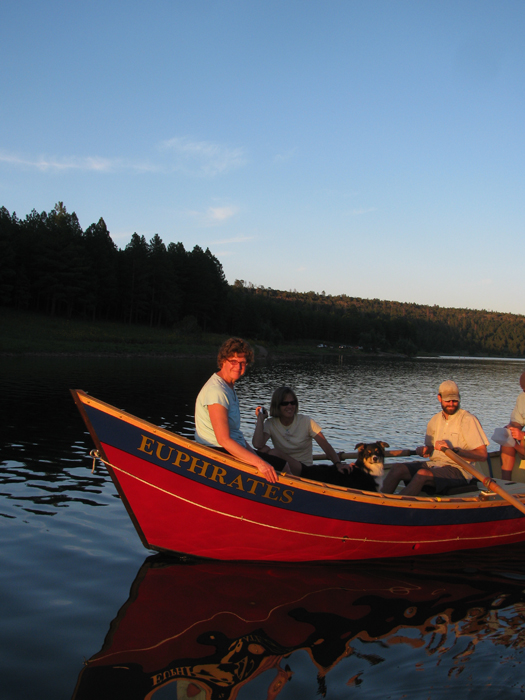 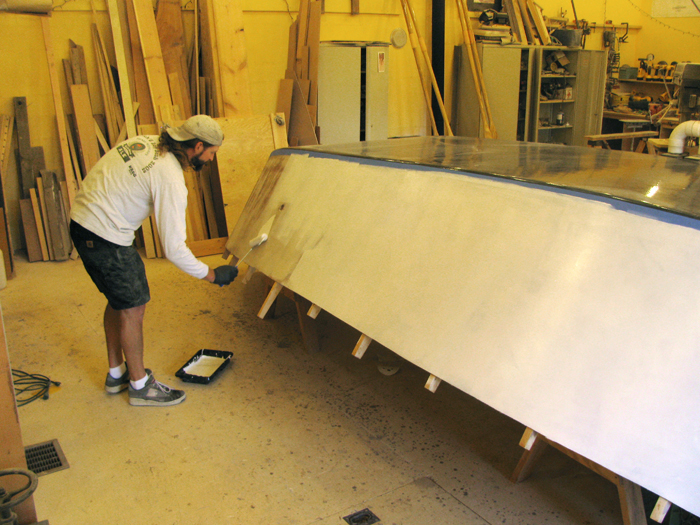 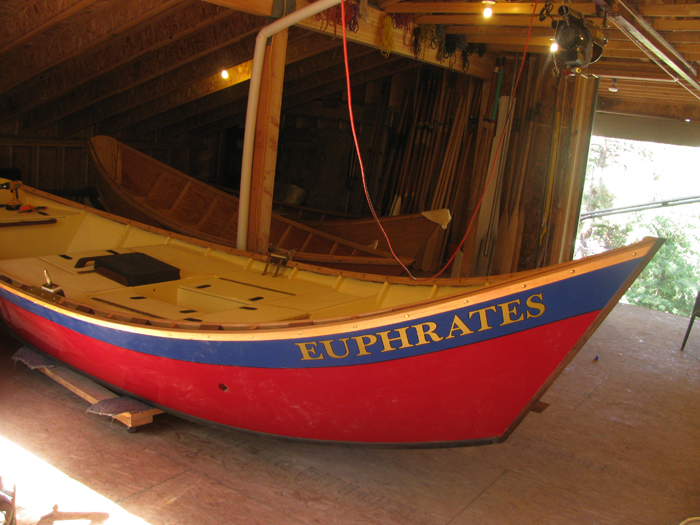 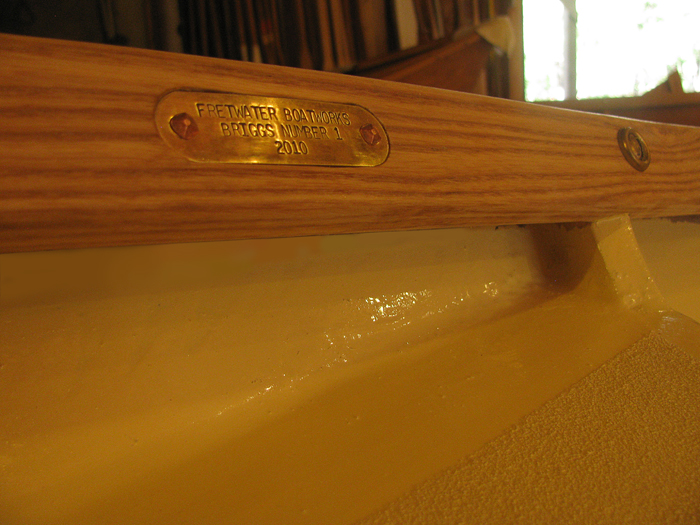 Back in the boatshop

I'm back in the boatshop for a couple weeks after a four-month hiatus on the river. The Euphrates is nearly done, the Lodore is lagging but we're jamming to get her done for their mutual baptismal trip at the end of the month. A few shots attached.… 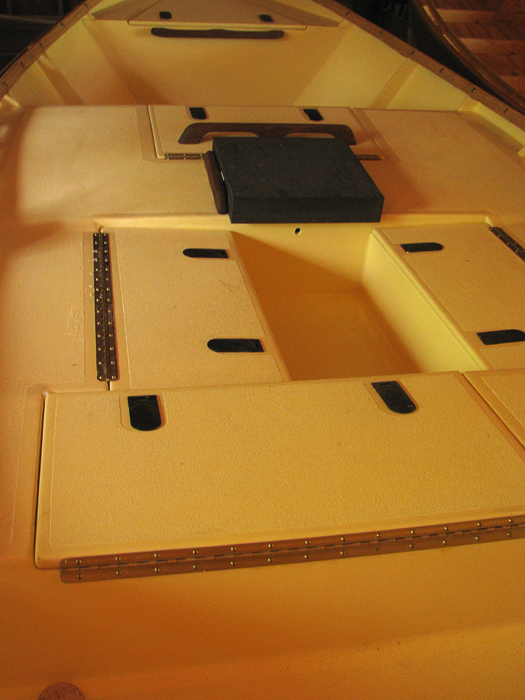 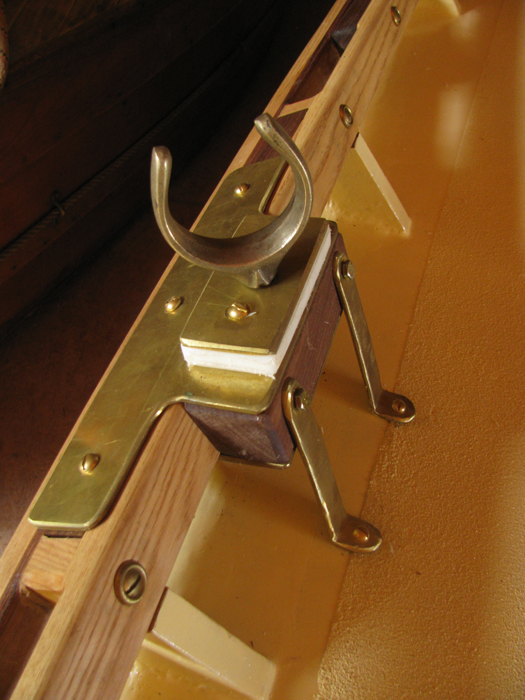 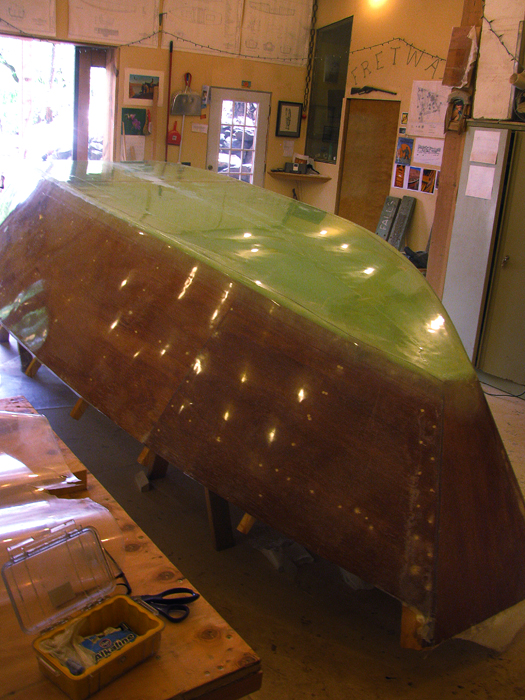 Just back from a commercial Grand Canyon trip in my old Briggs boat. It still knows the way through.
Here are some pictures of the hand-off of the Glen Canyon to the new owners two weeks ago, and the launch at Lee's Ferry for its voyage to Glen Canyon Dam, where it will live. It'll run the flatwater daily stretch from G.C. Dam to Lee's Ferry (15 miles).
The upstream launch happened to coincide with my downstream launch, so I got to be…
Continue

We did a test launch of Glen Canyon yesterday afternoon. Wow. It's really fast. It's got all the power of a Briggs Grand Canyon boat with the 10' oars, and all the lightness and quickness of a McKenzie. Spins like a top.Too bad I have to say goodbye to it today!… 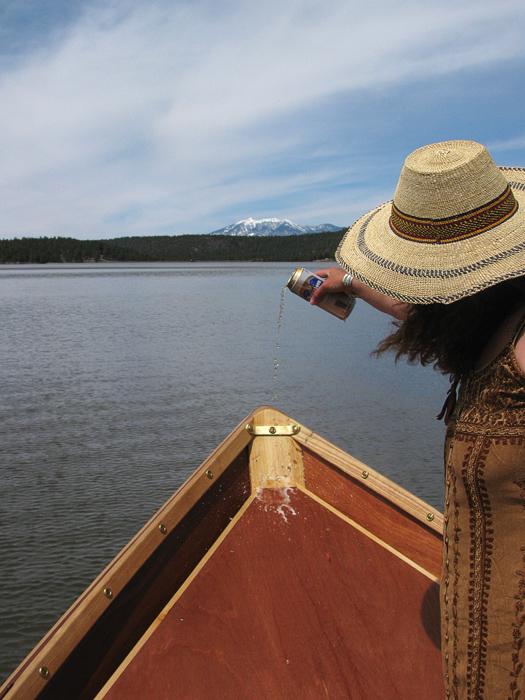 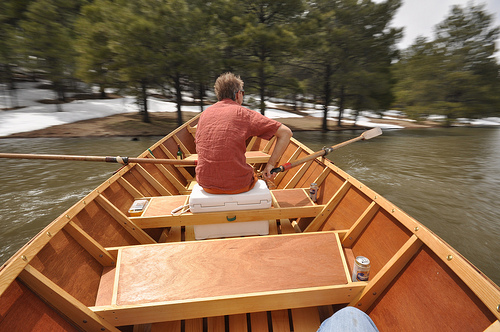 A couple people have asked what the gunwale and bowpost fasters are. They are called sex nuts and are a thing Andy Hutchinson showed me. They are also called grommet nuts, but that's not as fun to say. They inset into a 3/8" hole in the gunwale or stem, then you shoot though with a 1/4" machine screw (oval head if you can find them) with a finish washer. Once all is tight, zap the extra threads off and hit it with a fine grinder.
When we had a gunwale explode last…
Continue

The name says it all

Just stuck on the vinyl name, which diminishes 5/8" in height from bow to stern in proportion to the thinning sidewall and stripe heights. Something about those finishing touches just makes all the drudgery worthwhile. Maybe it's like the pain of childbirth fading when the child smiles at you. Ready to start another!
She'll be in the water at Lee's Ferry in a couple days and I look froward to getting some shots of her in her natural setting instead of in my cluttered…
Continue

The contractions are starting to come pretty regularly. I think I just need to keep breathing deeply and PUUSSSHHHH!…
Continue

Is it bad luck if it's just a green stripe and not the whole hull?…