AJ, thank you for the hospitality! Terry

Nearing completion of this 16'9'' X 48" Hutchinson-design Briggs boat for the Grand Canyon. We have a launch in October to look forward to, hoping to get this out on soon for some water time. Here I am dry fitting the hatch lid pieces. Just finished the gunwales. … 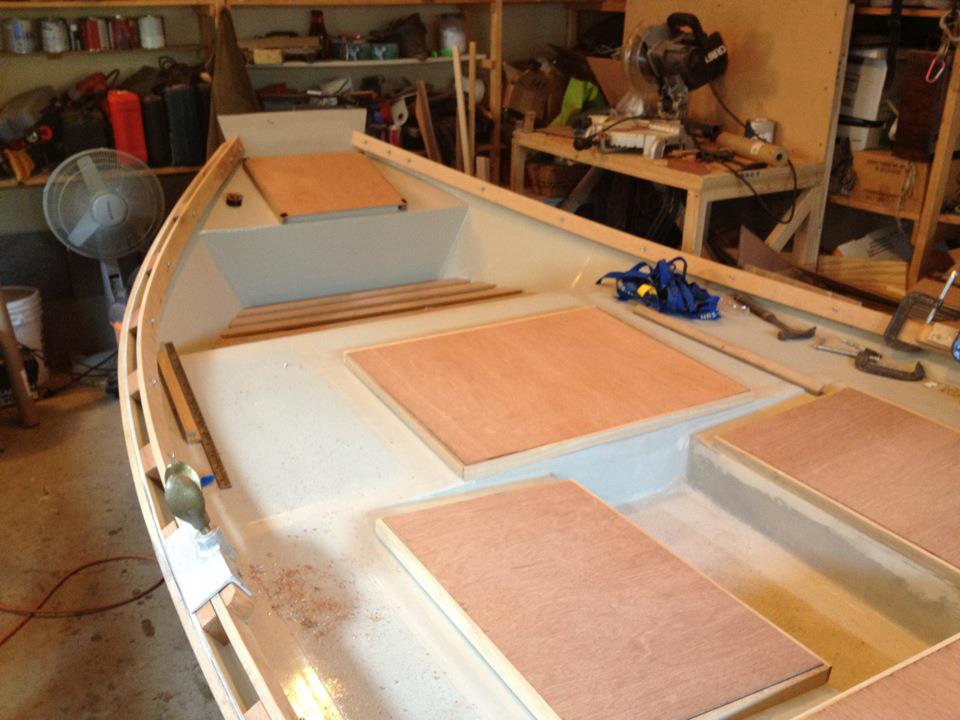 Finally got pictures uploaded from a canyon trip last month. Perhaps it's cheating to put it here as there's only one wood boat on the trip, but she's a real beauty. A Derald Stewart (sp?) built dory from Grand Junction named the Canyon Wren. She recently got a full re-fit from Andy Hutchinson, and looks great. The other dory is my alumaweld, Chinook, although I hope to have a wood boat finished by my next trip down there!

Here's one picture- Canyon Wren in Upset, and there…

It was Spring low flows but this Grand Canyon dory lives to tell another tale.  Check out the Zizumara's run of Lava Falls. April 2012, 7-11,000 cfs. Enjoy!

Well I went ahead and skipped some of the boring pictures (I took a bunch) and went right in to the good pictures with noticable progress.  I got all the bulkheads cut then went to work sanding the inside of the hull down so I could epoxy them all in place.  Once the bulkheads were in solid I took out the original seats. I left them in to help hold the hulls shape throughout the work. I also got to work fitting the rear deck and starting to work on the most forward edge of it's connection to…

Lat week I was able to get the rest of this infernal green paint sanded off. The best thing that I found were Gator Black Zirconium Sanding disks.  They lasted way longer that than the other 2 or 3 brands I tried.

Here she is without her makeup In spite of a fair amount of lame oarsmanship by her captain, the Julius once again survived Grand Canyon upright. Roger Fletcher, Andy Hutchinson, Dan Dierker and other friends conspired to build her ten years ago, and this is her fourth trip through Grand Canyon. To date she has not been knocked over or ge-busted. Pretty cool little boat in spite of the damned eight-foot oars and short rowing compartment. Of particular horror is my truly lame run in Bedrock--I thought for sure we were…

I was looking for a boat trailer, and instead ended up with another boat and still no trailer.

I'm wondering if any of you guys can tell me what boat this is?  The son who I bought it off said his dad built it from plans a while back but he does not know what they were.

I have to get it home & open this can of worms to see what is in there, but there is no rot and I think I can get her in great shape shortly. The price was crazy cheap, so at the very least…

Started working with my son last night.  Sawzall and a 5yo makes for short work of the interior and removing the chine logs.  Lucky for me the previous owner/builder was not familiar with marine fasteners and 5200 adhesive.

Truck bed liner on the bottom is in pretty good shape.